SIGNIFICANT opportunities for Australia’s agricultural exporters exist under the Australia-United Kingdom Free Trade Agreement (A-UK FTA) which is expected to come into effect in the near future following its signing in December.

Sheepmeat is at the top of the list of the commodities to benefit, with an immediate access to a duty-free quota of 25,000 tonnes in the first 12 months after the FTA is ratified, and rising to 75,000t in Year 10.

Speaking at a Toowoomba and Surat Basin Enterprise breakfast in Toowoomba last Wednesday, Austrade director Investment, Agribusiness and Food Centre of Excellence Cheryl Stanilewicz said many Australian products already had a strong foothold in the UK on which to build.

They include sheepmeat and plant-based foods, as well as service industries, with sustainability credentials bolstering their appeal.

“The no. 1 thing in agrifood is health and sustainability are key; we’re seeing that across the world, in developed markets particularly, and the UK is no different,” Ms Stanilewicz said.

Ms Stanilewicz said price point was also a key considerations for UK consumers, and “the rise of the flexitarian” was opening doors for traditional as well as innovative Australian products.

“Plant-based food is a key one.”

“Latest research in the UK claims that 41 per cent of families there are following a flexitarian or meat-free diet, and 65pc are also trying either vegetarian or vegan meals in the last 12 months.”

Among the four companies Ms Stanilewicz highlighted as already being active in the UK, and standing to benefit from the A-UK FTA, was Midfield Group, already a shipper of beef and sheepmeat to the UK from its base in Warrnambool, Victoria.

While the UK market for Australian beef is currently very small, she said it was one of the highest-value export markets.

“With the FTA changes … we fully expect this to change, and while the British highest trust is for domestic and Irish beef, surveys have shown that Australian is the first-preferred imported beef, so that’s very important for us.”

“Midfield’s really excited about this opportunity to supply large volumes of red meat into the UK and to offer to the UK as a sustainable, innovative supplier.” 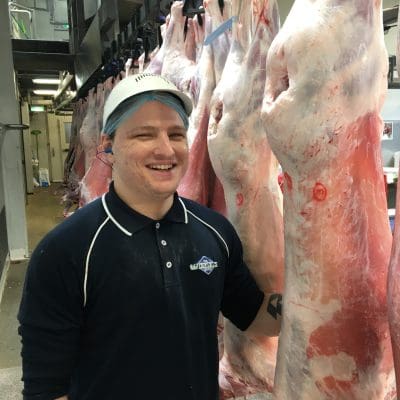 Midfield Group is a leading supplier of Australian red meat to markets including the UK. Photo: Midfield Group

Midfield Group includes grazing properties and dairy as well as meat processing, and Ms Stanilewicz said it had the kind of sustainability credentials the UK consumer was likely to seek, with transformation of its protein-recovery system adding to its appeal.

“Midfield Group have committed to achieving a net zero carbon emission by 2030 as an entire business.”

See below for a rundown on beef and sheepmeat tariffs and quotas.

In China’s absence, the UK has become Australia’s biggest market for wine exports, despite it being subject to a tariff of up to 26pc.

The UK is also a major customer for Australian honey, and Hive & Wellness’ Capilano brand is already well established in the market, despite a 16pc tariff which is set to go to zero once the FTA comes into effect.

Mr Stanilewicz said Australia was rated by the CSIRO as having the healthiest honey bees in the world, and the market developed by Hive & Wellness’ Capilano brand was evidence of the appeal of Australian honey to the UK consumer.

On the innovation side, Ms Stanilewicz said Hive & Wellness was working on traceability for its honey so consumers can find out about the beekeepers and floral sources involved in making product.

In the plant-protein space, Ms Stanilewicz talked about Fable Food Co, which started on the Sunshine Coast in 2019, and launched in the UK last year.

It uses shiitake mushrooms to make a substitute for pulled pork, braised beef, and beef brisket, and also has a line of ready-made meals.

Already popular in the UK, partly because it has been used and publicised by celebrity chef Heston Blumenthal, Ms Stanilewicz said Fable Food product was due to launch in the US later this year.

On the service front, Ms Stanilewicz said AgriWebb has been a standout, and chose UK as its international launch country.

As developers and providers of livestock farm-management software, AgriWebb was a 2014 start-up, and UK company Grosvenor Food & AgTech, previously Wheatsheaf Group, now owns a minority stake in the business.

AgriWebb is used in countries including Brazil, New Zealand and South Africa as well as Australia and the UK, and is now used to manage around 10pc of Australia’s sheep and cattle.

The software is being used to boost profitability, as well as assist with provenance of livestock, and sustainability.

“My next project is to get as many trade delegations to visit Australia from the UK as possible to start those partnership talks…to start to make this free trade agreement a reality,” Ms Freeman said.

While the UK and Australian Governments are putting the framework in place for increased bilateral trade, Ms Freeman said Australian companies will still need to look closely at UK markets and demographics, and build relationships with importing customers.

“People want to know who you are.”

“Be absolutely clear about your motivation because you’re going to need commitment.”

The A-UK FTA includes an embracing of digital rather than paper-based documentation, and requirement for a declaration rather than certification of origin, all aimed at speeding up trade without compromising standards, and as evidenced during COVID.

“If the last two years have taught as anything, it’s that you can do stuff virtually.”

“We need you guys…to use it and to start doing some phenomenal business because we all have an opportunity now and it would be really good to help you and support you to take advantage of that.”

With the removal of tariffs on wheat, barley and oats over four years, opportunities for volume grain exports also exist.

At present, canola is the only Australian dry-bulk agricultural commodity exported to the UK, and this already has a zero tariff.

The UK Government appears to be dealing with the Australia and NZ FTAs concurrently, and on May 11 issued a statement with regard to the Trade (Australia and New Zealand) Bill before the UK Parliament.

The UK bill and secondary legislation now need to be passed, in part with respect to reciprocal procurement opportunities for companies bidding for government contracts under the FTA.

The FTAs also includes broader working visa arrangements for residents of both nations.

After publishing its report on the A-UK FTA on April 13, the UK Trade and Agriculture Commission, a panel of independent experts, is expected to report on the UK-NZ FTA this month.

“I am excited to see the UK implement its first ‘from scratch’ Free Trade Agreements in over 50 years,” UK International Trade Secretary Anne-Marie Trevelyan said in a statement.

“Our dairy and red meat sectors will, for the first time since the 1970s, have tariff-free access that will grow through significant quotas until being fully liberalised,” NZ Prime Minister Jacinda Ardern said in a statement released March 1.

Following the swearing-in today of Murray Watt as the new Australian Minister for Agriculture following last month’s Federal election, the passage of Australian legislation tied to the A-UK FTA can be expected to resume.

No time frame is yet forthcoming.

Behind New Zealand, Australia is the second-largest supplier of imported sheepmeat to the UK.

In 2021, the UK imported around 32,000t of sheepmeat from NZ, while shipments from Australia were around 9000t, and product from both countries accounted for more than 80pc of total UK sheepmeat imports.

On beef, around two-thirds of UK beef imports come from Ireland, with Brazil and EU nations accounting for almost all of the rest.

Following Brexit, Australia gained a tariff-free combined sheepmeat and goatmeat quota of 13,335t to the UK.

High-quality beef from Australia is eligible for a reduced or zero tariff on 4669t.

Currently, Australian beef, sheepmeat and goatmeat are subject to tariffs of up to 12pc plus £253-£260 per 100 kilograms.