The agency raised its forecast of India’s wheat crop by 2.7 million tons to a record 99.7 million on updated government data. It raised Russia’s by 3Mt to 71Mt, reporting good harvest results to date in the winter wheat region and continued excellent weather in the spring wheat belt. Excellent spring wheat conditions accounted for USDA lifting its Kazakhstani wheat crop estimate by half a million tonnes.

While the increases in certain countries’ supply was beneficial to local consumers, the downside of reduced supply in Canada and Australia would tighten supply available for export and world trade this year.

USDA lowered its forecast of the Australian crop by 2Mt and the crop in Canada by 1Mt, both reflecting continued dry conditions during the growing season. World 2018/19 exports forecasts were lowered 2.5Mt, being reductions from Australia of 2Mt and Canada 500,000t. Indonesia and Iran imports were down 1Mt and 0.5Mt respectively.

Global use was raised 2.3Mt, the feed and residual use in Russia and EU being 2Mt and 1Mt higher than previous report. With total supplies rising faster than use, global ending stocks were raised 2.3Mt to 261.3Mt but are 5pc below last year’s record.

USDA’s report on world markets and trade said Australia’s wheat crop this year would be would be the lowest since 2007/08.

It called the prospects for Australian wheat exports lowest in a decade, at 14Mt in the year July 2018 to June 2019. 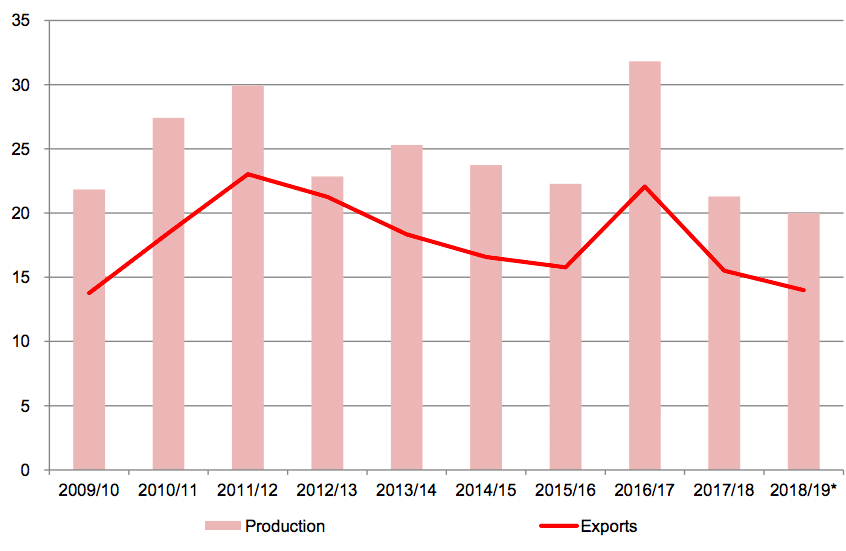 The report said as Australian supplies became tighter, prices had climbed to levels significantly higher than those of other global exporters.

Though wheat consumption this year would exceed production (not seen for 6 years, through consecutive seasons of stock increase), USDA said the effect of tighter wheat supply was even more apparent after accounting for impact of rising stock in China. 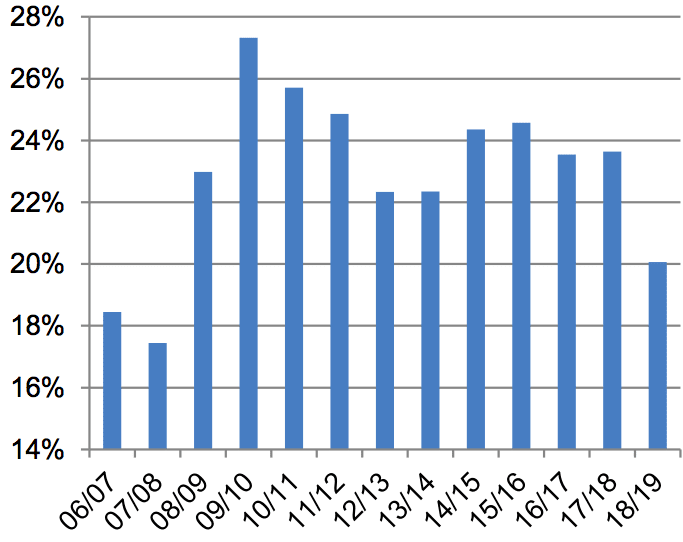 World wheat stock-to-use (not including China) tightest in over a decade. Source: USDA

China’s wheat stocks have surged for several years in a row and are forecast to account for more than half of global ending stocks this year. China’s large stocks, which are considered mainly unavailable to the global market, mask the extent to which global supplies are tightening. The stocks/use ratio at the end of 2018/19 for the world less China is forecast to be the tightest since 2007/08. With prices rising, many exporters are expected to ship much of their available wheat and will have more limited supplies left over at the end of their respective marketing seasons. Likewise, with higher prices, importers are expected to maintain tighter stock levels.