The marketing year runs October to September; seven months total wheat exports were 13.1Mt, of a forecast full year quantity of around 19Mt. 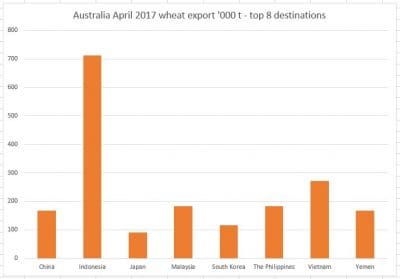 Yemen  commenced its current-crop Australian wheat imports in December with 91,500t and had increased to 167,597t in April to become Australia’s largest non-Asian buyer for the month.

India took only 500t of Australian wheat in April. The market had bought 887,560t in January, but as expected during the midst of its own harvest and reintroduction of a tariff, import tonnage has tailed off.

India’s appetite early in the crop year had unusually made it Australia’s second-largest wheat customer, but traders would be surprised to see it buying bulk shipments in coming months.

Chinese imports were seen continuing strongly, though had dropped from 334,003t in March to 166,899t in April. Sales of this size were expected to continue in Australia’s current-crop program.