Australia’s barley harvest began this month with typical early-season worries about quality.  Grades will only become clear once headers reach the peak of harvest which in Western Australia, South Australia, Victoria and southern New South Wales will stretch through November and December as quality-conscious consumers, the maltsters, cross their fingers for a good harvest. 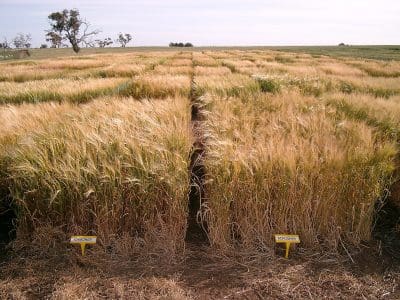 Agricultural consultant Chris Heinjus said hot weather 10 days ago had caused pinching in some grain crops.  He expected early F2 and F3-grade barley deliveries were not a good indicator of what’s to come.  “It’s too early to tell. The best indicator of how the crop is running will be the price grade spreads when deliveries start to flow properly in the next month.  The price movement on malt will reflect the quality of the receivals coming in.

Scope barley is a malting variety planted in medium-rainfall districts of South Australia, and premiums have been around A$30/t for that variety of number 1 grade malting barley.

Growers Grain Central interviewed about marketing their barley crops agreed it was too early to predict this year’s percentage of malting grades.

Northern Mallee farmer John Gladigau said  ‘normally we would expect around a third of our barley to go malt, but with the frost and dry spring we would expect it to be less than that this year.’

“Selling malting barley we usually wait till harvest time which is often when the best premiums are around.”

“Last year it was low proteins, and this year the possibility of high screenings is likely to be the challenge for barley crops.”

Tighter seasonal conditions in 2017, along with a few warm days in October, would likely lead to higher protein and screenings and could compromise barley test weights; not fresh news to buyers of barley for consumption in China’s malting and beer industry.  There are reports of Chinese malting barley purchases of up to 800kmt of Canadian barley.

China has annual demand for imported malting barley of around 2.5 million tonnes, along with at least equivalent quantity of feed barley demand, and relies heavily on suppliers EU, Canada and Australia.  2017 has been a year of crop weather events in the northern hemisphere – untimely rain – and in Australia where frost and lack of moisture were widespread.