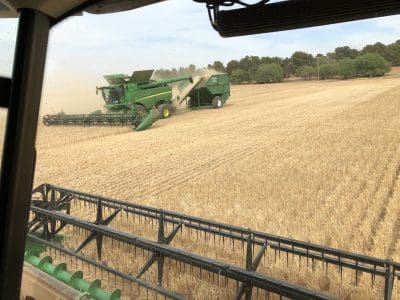 A chaff cart in use during the barley harvest last week in the Grenfell district of NSW. Photo: Jamie Wright, Springfield

FARMER selling has picked up over the past week as the 2019 harvest gathers momentum in the southern grain-growing regions of Australia, and the increase in supply, in conjunction with a rally in the Australian dollar, has pushed grain prices lower across the board.

The Central Queensland wheat harvest came in close to industry expectations at around 375,000 tonnes, and on-farm storages are filled to the brim as growers take advantage of a lack of production in the southern part of the state. This grain will be trickled into the domestic market over coming months, filling part of the void created by abysmal production in southern Queensland and northern New South Wales.

The southern Queensland harvest has come and almost gone in a very short period of time. There were isolated pockets of harvestable grain that were not cut for hay but, on the whole, the ongoing drought has pushed production lower than last year’s dismal total.

The story in northern and central NSW is no better. These regions should be a hive of activity, with headers rolling and queues at the local silo a feature.

Instead, the paddocks are bare, and many silos have not even opened due to the record low production. What has been produced will go directly into the domestic market, or is being stored on-farm for delivery to local end-users in 2020.

The production outlook in southern NSW, Victoria, South Australia and Western Australia is far better, and this is where the supply pressure is being seen as growers look for cash flow by selling off the header. Falling grower bids may well stem the tide of selling, so cash prices become a function of how desperately the trade needs to buy.

With domestic demand covered, export interest will be the most likely catalyst for an increase in buyer appetite.

Barley has dominated harvest proceedings thus far. Reports from the field suggest that early barley quality, and yields, have been variable, as the tough finish manifests itself in high screenings and low malting-barley selection rates in many districts. That said, it seems that yields are generally surprising to the upside.

The price of wheat delivered onto the Darling Downs retreated around $5/t last week to close at about $410/t. Western Australia and the Eyre Peninsula are the regions most likely to ship wheat around to Brisbane over the next 12 months, and grower bids at those ports fell by around $7/t across the week. Geelong bids fell by the same amount.

Port Lincoln is the cheapest Australian grain at the moment, with ASW wheat and feed barley values now down to US$225/t free on board (FOB) and $193/t FOB respectively. Kwinana port values sit at around a premium of $8/t for both grains.

Both ports should be competitive into the wheat export pathway at those values, and recent sales of wheat out of Western Australia support that notion.

Barley, however, is a different story.

Australia has relied heavily on sales to China in recent years, and 18 November is the first anniversary of the launch of the anti-dumping probe into Australian barley pricing by the Chinese Ministry of Commerce (MOFCOM).

Under World Trade Organisation (WTO) regulations, results of such investigations, or some guidance on potential actions, are expected within 12 months, but a six-month extension can be granted.

The Australian trade will be looking to Beijing to provide such guidance, whether positive or negative, in the next few weeks so that the market has some direction and certainty through harvest and into the New Year. There are rumours of small volumes being traded, but most exporters are not willing to entertain Chinese enquiry due to the execution risk any sales would present under the current circumstances.

So where does the Australian barley exporter look in the absence of Chinese demand? Saudi Arabia is the logical answer. Black Sea values were sitting at around $190/t FOB last week. Add freight of $25/t and you have a cost and freight (C&F) price of $215/t into the Red Sea port of Jeddah. That compares with $226/t C&F ex WA using $200/t FOB Kwinana, and freight of $26/t. Out of Port Lincoln, it works out at $223/t C&F using freight of $30/t. So no joy into Jeddah at current values.

How about the Persian Gulf port of Dammam? Freight from the Black Sea into Dammam is around $11/t over Jeddah. Freight out of Australian ports would be the same as Jeddah. Suddenly, at last week’s prices, Australia is competitive against Black Sea origin for the next Saudi tender.

However, Argentina could well rain on our parade. Export barley values out of the deep-sea port of Bahia Blanca were quoted at $170/t last week. Add freight of around $42/t, and Argentina trumps both the Black Sea and Australia at the next tender. Argentina likes to get the business on early, so is also likely to be the weakest seller. This is especially the case at the moment, as the new Peronist government is threatening to increase export taxes.

The only other obvious export options at the moment are Thailand and Indonesia. The latter is expected to be looking to Australian supply once the Free Trade Agreement has been ratified. It has been tabled in the Indonesian parliament and will be debated in the Australian Senate this month. Endorsement by both parties is expected by year’s end.

Domestically, the Queensland stockfeed market will continue to require feed barley from Victoria, South Australia and Western Australia for the next 12 months.

At the current delivered Darling Downs spread of $35/t, feed barley is buying demand away from wheat, and the consumer has been taking advantage of the relative value in recent weeks.