Barley shapes up against corn in Asian feed: AGIC

UNPRECEDENTED events affecting global grain trade – and Asia in particular – are offering opportunities for Australian grain in the midst of its bumper export year for wheat and barley. 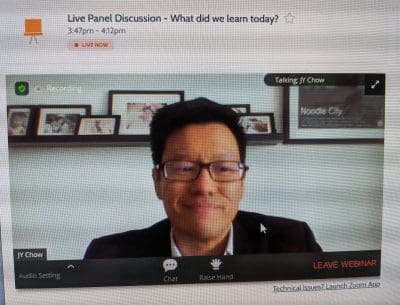 These were outlined in the Australian Grains Industry Conference (AGIC) Asia Live 2021 event, when representatives from Australia’s three biggest bulk handlers and others outlined the profile of supply and demand.

The impact of COVID, China’s rebuilding of its pig herd post African Swine Fever (ASF) and also its imposition of tariffs on Australian barley, as well as Russia’s export tax, and changing Asian diets were all discussed.

‘Confidence builds demand’ was the theme of the virtual forum, which was streamed in English, Bahasa and Vietnamese to around 650 delegates from 25 countries.

Most speakers touched on Australian barley pricing into South-East Asian feedmills as a cheaper alternative to United States corn, which is being bought in massive volumes by China.

“On a worldwide scale, we might see a shift to feed wheat from corn,” Mr Jester said.

“In the past couple of years we have seen exactly the opposite.

“With the absence of Chinese demand… Australian barley has been finding significant demand from Asian feeders, including both Thailand and Vietnam, which are both on track for record large imports in 2020-21,” Ag Scientia analyst Lloyd George said.

In January, the Chinese Government granted approval for selected varieties of corn and soybeans to be grown in China.

This could well reduce China’s reliance on genetically modified corn and soybeans from the US and South America by increasing its domestic yields markedly.

Mr Chow said Asia was out to make geopolitical gains through reducing its reliance on key grain-exporting countries.

“China and the rest of Asia have a huge mandate to be self-sufficient.

“The large wildcard is how China employs the GMO mandate.”

Mr Chow said South-East Asian feedmillers had tended to stick to a “very American way” of formulating corn and soy, and that Australia’s Asian customers need to have a “just in case” rather than a “just in time” point of view.

“South-East Asia, the market outside China, you should look at…options outside corn.”

Mr Chow said barley was a good option for them to have, and ACE Livestock Consulting principal Tony Edwards expanded on the suitability of it as the base grain for poultry diets now that enzymes were available to counter some of its characteristics.

In Australia and in export markets, barley is currently priced well below wheat and sorghum.

Mr Edwards said this had made it a preferred grain for the Australian poultry industry.

“I hope we will be able to convince you to use barley in diets in the near future.”

Barley’s protein is typically higher than corn, but similar to or lower than wheat.

Mr Edwards said Australian poultry producers were using barley at inclusion rates of up to 60 per cent.

“It’s used extensively in poultry diets as a safe and reliable feed component.”

Mr Edwards said while corn and soybean meal were dominant in much of the world’s poultry and pig feeds, they were not essential, and Australian pigs thrived on diets which in most cases included little or no corn and soy.

Mr Chow spoke about the Asian protein gap, which in soybean equivalent was estimated to total 135 million tonnes (Mt) in 2018 prior to ASF hitting in 2019.

As of December 2020, China has rebuilt its pig herd by about 100 million head, and this phase, along with weather events in some major grain-producing countries, had fuelled the strength in grain markets.

He said the replacement of China’s pig herd was being done through a rising number of professional farms running 500-3000 head rather than backyard operations with less than 500 head.

“This is really driving the demand for commercial feeds.”

However, Mr Chow dispelled the myth that Asian protein demand would increase indefinitely.

“In the mid to long term, I see that gap will narrow,” he said.

“The question is: When do we see this inflection point?

“I think this gap might close faster than we think.”

He said Asia seemed destined to hit a “saturation point” for protein, with its ageing population being a factor.

“We have a growing middle class in Asia, and by the end of the century, most of these countries will be older than the US’.

“When you age, the way you consume meat will be very different.”

He said other signs from the market included major Chinese fast-food chain Dicos swapping chicken eggs for plant-based JUST eggs in some menu items, and interest in alternative proteins.

Sources for those include insects and seaweed for animals, and plant-based and cell-based foods for humans.

“The richer you get doesn’t mean you consume more meat.” “Environment and health are things that rich people are much more likely to be concerned about; we’ve got many more people further down the curve.

“I feel like there’s still plenty of room in the growing middle class market segment across Asia.”

Australia’s Grains & Legumes Nutrition Council general manager Dr Sara Grafenauer spoke about the health benefits of whole grains in diets, particularly as conditions such as diabetes trend up in some Asian nations.

Mr George said the record for Australian grain exports was 32Mt set in 2016-17, and that the 2020-21 figure was likely to come in slightly below that.

This is despite monthly wheat exports of 2.5Mt starting in December and running into June from a national wheat crop which will exceed 33Mt, 1Mt above the previous record set in 2016-17.

“Farmers have already committed a large proportion of this year’s wheat and barley crop.

“Most of Australia’s 2020-21 wheat crop has been bought by exporters with much of this already sold to overseas buyers.

Australian grain exports are already running at capacity and this will continue until at least June, when new-crop Black Sea grain will become available.

Mr George estimated Australia’s 2020-21 barley exports at a minimum 5.5Mt from a national crop of 13Mt.

“Trading companies are experiencing strong export demand for wheat and barley from traditional and non-traditional destinations.”

He said Australian wheat and barley have been competitively priced, despite global wheat and feedgrain prices soaring to multi-year highs in recent times.

“Australian wheat and barley has remained competitively priced into Asia and the Middle East and  Africa.

“Australian exporters have been reporting increased buying activity from core Asian buyers amid the uncertainty of how these Russian export taxes will impact supplies in the medium term.

Big crop on the move

CBH Group in WA, Viterra in South Australia, and GrainCorp in eastern states are Australia’s three major bulk handlers, and each had representatives address the AGIC Asia forum.

They detailed their receivals and export programs as follows:

GrainCorp’s Mr Jester said he estimated wheat export surpluses at 600,000t for Queensland, 9.5Mt for NSW and 4.2Mt for Victoria, all with upside.

On barley, no exports are seen out of Queensland, but at least 1.5Mt for NSW and 2Mt for Victoria is pencilled in.

“We do believe that 3.5Mt can be exported out of the eastern states.”

Mr Jester said Queensland’s wheat crop was estimated at 1.2Mt, 46pc of it Prime Hard, 30pc Hard and the balance APW or below.

Queensland’s barley crop of 300,000t will all be consumed by the domestic feed market.

In NSW, GrainCorp estimates the wheat crop at a record 13.2Mt, with 27pc Prime Hard, 26pc Hard and 47pc APW and below.

Barley was also seen at a record of around 3.8Mt, well ahead of ABARES on 3.2Mt.

GrainCorp’s estimate for Victorian wheat production at 5.5Mt is well above ABARES on 4.8Mt.

Mr Jester said the breakdown of Victoria’s wheat crop was around 30pc Hard and 70pc ASW, APW and feed.

“There have been a lot of feed sales from Victoria into Asian destinations.”

GrainCorp has pegged the Victorian barley crop at 3.2Mt.

This marks a startling turnaround from 2019-20, when Queensland and NSW exported minimal amounts due to the drought, and were a de facto export market for grain from other states.

“We wouldn’t be surprised if we go past 20Mt at the end of the season.

“We believe Australia will be able to compete even into the second half of the year even against Black Sea.”

Mr Jester said Australian grain already had a $15/t freight advantage going into Asia against Black Sea grain, but said that could increase to $25-$30/t. East-coast wheat exports in the current year are tracking a little behind the record years of 2011-12 and 2016-17. Image: GrainCorp

Of that, the Viterra network had taken in close to 6Mt, and shipped 1.8Mt from October to January.

Barley has also been of good quality, and Spartacus CL followed by Compass were the most popular varieties.

“This season saw an early and large program for SA barley through the Viterra port system.

“We’ll be down to the bottom of the bins by the end of the year, which is a great result, and where we’d like to be every year.

“We see very healthy demand for Australian wheat and we expect that to continue,” he said, adding that the impact of Russia’s export tax was an unknown for the market to navigate.

He said the freight market was “one of the moving parts”, and was expected to Australia’s shipping advantage to Asia particularly.

Mr Asser said buyers would continue to focus on Australia for quality and certainty of supply.

“Everybody likes a bit of certainty in their buying programs.”

CBH Group chief operations officer Ben Macnamara said the organisation receives around 90pc of the WA crop, and receivals from the 2020-21 harvest totalled 15.1Mt, well up on the five-year average of 13.9Mt.

“Overall it was a mid-protein harvest of around about 10.4pc…and screenings were low at 3.3pc.”

WA’s barley crop has been estimated at 4.2Mt, and most of Spartacus CL, Planet and LaTrobe made up the bulk of its malting receivals.

“This year we received sufficient malt to certainly service the domestic market and some of the export demand we’ve seen.”

Albany broke its shipment record in December to help CBH achieve an average vessel-turnaround time of 3.24 days across four ports.

“On that basis, it supports plantings going forward.”

“Barley plantings should be strong again.”