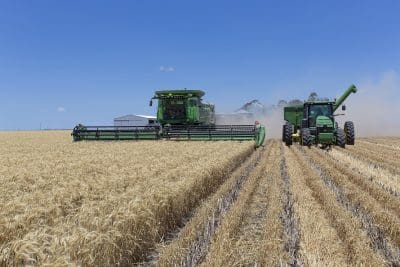 ‘BIG crops get bigger’ – that maxim of the grain industry is ringing true in 2016.

Analysts ten days ago were hesitant to call the crop any higher than 28.3 million tonnes as they kept their fingers crossed for continued clear, warm harvest weather.

Agfarm’s Chris Nikolaou said the national picture was a story of mega-yields in cereals, even though the two identifiable areas of damage (flooded crop areas in southern NSW and frosted WA southern zone crops) were locally significant.

It is a similar story with barley.

The national barley crop is tipped to be a record 10 million tonnes, in spite of WA serious frost damage.

Mr Nikolaou said the currency at 74 cents Australian to the US dollar was likely to drive Australian exports of wheat and barley.

He said big barley crops in Australia had an impact on export sales.

“Plenty of business in barley has been concluded with buyers in China recently,” he said.

Trade commentary suggests 600,000 tonnes of barley will be shipped to China in the December/January period.  Saudi Arabia appears likely to be a welcome return to Australia’s barley export list.

“However, the recent fall in domestic pricing and break in Australian dollar has led to very competitive pricing for Aussie wheat into our key South Asian consumptive homes. This is particularly so out of the East Coast and South Australia. Australia’s eastern states have better than expected supply of H2-wheat grades,” Mr Nikolaou said.

Milling wheat premiums in November and December have had a time (month of delivery) factor as well as a protein component.

The H2 spread is an opportunity for growers to get better value for their grain.

Each month’s delivery obligations have been as much of a headache for trade and consumer this harvest as for growers dealing with late onset of harvest.

In October it was the pressure of chickpea export commitments which drove nearby premiums over 40 per cent within a month.

Recent month feedlot deliveries of sorghum, wheat and barley have traded at unexpectedly high premiums, as have port/container terminal deliveries for nearby month export commitments.

Price rallies have been swamped with sellers, quickly negating the momentarily better prices. 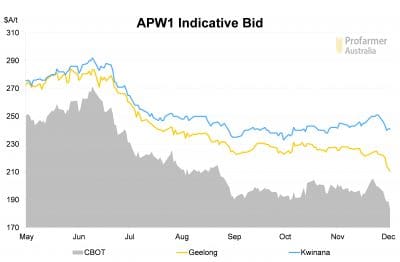 The Western Australian stem is telling a different story, however, where the season’s expectation of high production (and harvest-time incidence of frosted grains in wheat samples) has relatively shortened the supply of APW1-grade milling wheat.

Basis has steadily risen this year in Kwinana where anticipation of blending opportunity drove demand higher than in places of more ready supply of APW1 such as Geelong.

Be proactive in marketing

Prices have come under further pressure as the eastern states wheat harvest, though late, has moved southward from central Queensland, through Walgett/Coonamble in northern NSW, and South Australia and on into traditionally later areas.

While people are reluctant to accept lower values, ag advisory, Profarmer, urges growers to be proactive, rather than reactive, in this market.

Profarmer chief analyst, Hannah Janson, said growers could avoid leaving money on the table by carefully allocating tonnages against contracts (e.g. where contracts have a base price and grade differentials).

“The key message for growers is not to undervalue quality. Putting the time in to optimising contract allocation decisions and capturing premiums in the market when present (i.e. for higher protein grades) remains key to maximising average farm gate returns,” Ms Janson said.