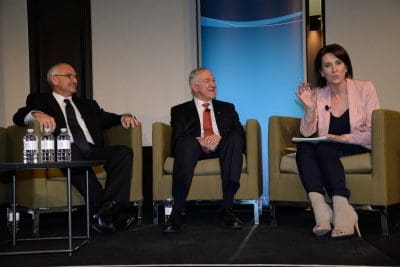 Mr Bradley told delegates at the Melbourne gathering that GrainCorp had gone as far as establishing an office in Kiev this year to get closer to the Black Sea market.

“We’ve got to understand what’s happening in the Black Sea… because it has the largest potential growth in production and productivity on the planet, and you’ve only got to see it on the ground to realise the potential is there,” Mr Bradley said.

“We thought we needed to know more about it so we’ve set up an office in Kiev…and we’ll be trading grain out of Ukraine.”

The office is already operating with a staff of 12, as part of what GrainCorp has said is now an important part of its strategy to diversify its grains origination footprint.

GrainCorp Ukraine will deal directly with Ukrainian growers, and connect them with GrainCorp’s customers in other markets.

“We’ll be trading grain out of Ukraine, partly to know what’s going on, but to see if there are further opportunities for us to participate in the actual infrastructure, which is very primitive compared with what we’re used to.”

Mr Bradley said pockets of this emerging export grain powerhouse had good-quality storage and port facilities, but its road, rail and port infrastructure was severely limiting the performance of its supply chain.

“They will one day get the investment that will make them significantly more productive.” Mr Wilson said CBH was working to reduce its overheads so it could market its grain at a price closer to Black Sea offers.

“We see that number on average at around about a $40-per-tonne differential to what Australia can place grain into Southeast Asia.”

Mr Bradley agreed that the discount of Black Sea grain was of concern to Australia.

“It’s a really challenging notion that we are $40 a tonne more expensive than grain coming from Ukraine,” Mr Bradley said.

Mr Wilson said the superior quality of Australian over Black Sea grain accounted for some of the premium.

“Quality accounts for a portion, but it doesn’t account for all of the differential.

“As a result of that, we need to do something.

“We are focusing on rationalising and improving our network and reducing the costs; we want to do more with less, and as a result we plan to take $100 million out of our total network costs.”

“You have to get that grain into contestable markets.

“One of the aspirations we have is to move ourselves down the cost curve.”

Mr Wilson said CBH Group was currently sitting in the middle of that curve.

“We want to move to that left-hand side and capitalise on that (grain quality) uniqueness.”

Mr Wilson said a challenge for CBH Group was matching storage and handling capacity to needs from variable production levels, and its infrastructure needed to be large enough to cope with big volumes, but not so big that it was underutilised in most seasons.

He said excess or insufficient capacity was one area where industry costs got pushed up.

“You plan for the average, but you have to be ready for the maxes and minimums.”

In a project being co-funded by the NSW Government, Mr Bradley said GrainCorp was investing close to $100m in improving the NSW rail network to take incremental costs out of the supply chain.

He said some rail sidings were “highly inefficient” places to load grain, and rail speed limits of as low as 20 kilometres per hour were in place for fully loaded trains in parts of the network.

However, bright spots existed, and these included the duplication of the railway line into Port Botany, NSW’s largest container port, where Mr Bradley said trains currently had to access at walking pace.

Both Mr Wilson and Mr Bradley said government could do more to improve the road and rail infrastructure on which bulk-handling relied.

“I think we need better roads in eastern Australia.”

Mr Bradley said he could see an increasing role for technology in driving GrainCorp’s efficiency in Australian and offshore operations.

“Farmers are using more technology for their own farm management, and we’re also investing in technology to be more efficient in receival.”

Mr Bradley said new technology being employed in the industry included blockchain to provide provenance and security as sought by customers in sectors like GrainCorp’s North American malting interests.

“Brewers particularly want to know what paddocks, what variety, and who’s growing it, and they want to use that in their marketing.”

Mr Wilson said CBH wanted to be a “fast follower” in the technology stakes, rather than a pioneer or a leader.

“There will come a point in time where we say: ‘Let’s adopt that’.”