BULK handlers across Australia are finishing what could well be the nation’s biggest ever bunker-building phase as harvest kicks into gear and traders position themselves to ship all they can ahead of Northern Hemisphere new crop.

A thumbnail sketch of the works points to an additional 4 million tonnes (Mt) being added this year, with Western Australia’s CBH Group making the biggest increase by far at 2.7Mt, and several operators east of the Nullarbor collectively having something to rival it.

They include Robinson Grain, which trades across the eastern half of Australia, and has bunkers and a container-packing facility at Trangie in central New South Wales.

Robinson Grain general manager Adam Robinson said it had increased capacity at Trangie by more than 30,000t to around 125,000t, and said the need for an expansion became evident in July, when another big-yielding year started to shape up.

“The central west still has a lot of carryover grain, and farmers are probably going to have to hold pulses,” Mr Robinson said.

“If you look at where the extra capacity is coming, it’s in areas still holding grain from last year.”

However, it is having to fit into a supply chain still holding parcels of last year’s bumper crop which went into a system emptied entirely by drought in preceding years.

Storms and showers scudding across the NSW grainbelt in the harvest window are also making more space look necessary to handle what could well be an increased number of segregations brought about by potentially a much wider protein spread than last harvest, and some downgrading.

This is in marked contrast to last year, when high and even quality of wheat, barley and durum were the hallmarks of the harvest.

Bunker storages going in across Australia indicate the fact that Australia could well break its wheat record set last year, and some including IKON Commodities are putting it north of 36Mt, and well above the 32.6Mt forecast by ABARES.

While the national barley crop will be smaller than last year’s, production of major pulse crops is expected to be high again, and canola is on track for a record at more than 5Mt, up more than 10 per cent on last year.

GrainCorp is eastern Australia’s biggest bulk handler by far, and has put in bunker storage to hold an additional 1 million tonnes this harvest.

In southern Queensland, GrainCorp has added 30,000t each at Meandarra and Noondoo and 15,000t at Thallon.

GrainCorp’s “flex” sites, which only open in bumper years, will add a further 500,000t across the network.

CHS Broadbent has also put in additional bunkers at its Moree site, but is not said to have expanded at its Jondaryan site in southern Queensland, or its two sites in Victoria.

Emerald Grain as the owner of Melbourne’s only bulk grain terminal is looking at adding up some additional bunker storage if required to its network in Victoria and southern NSW.

“We did a lot last year, and we’re looking at a couple of extra scrapes this year; we might put another 30,000t in this year,” Mr Johnson said.

Cargill’s GrainFlow network in NSW and Queensland has added a total of more than 300,000t to its storages, including a major expansion at West Wyalong in central NSW.

However, GrainFlow has not expanded capacity at any of its Victoria or SA sites this harvest.

While bumper crops are expected in many parts of NSW, Queensland and WA, some regions in Victoria and South Australia had a less than ideal season, and the need for surge space is limited in both states. 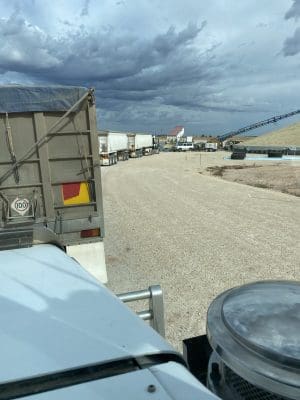 GrainCorp has added capacity at two sites in Victoria – 150,000t at Nhill in the Wimmera and 80,000t at Murchison East in the Goulburn Valley – and some smaller operators in both states have also made expansions.

In SA, T-Ports has prepared four bunkers at the Eyre Premium Hay site at Kimba which add a further 70,000t in total to its network.

It includes sites at Lock and Lucky Bay on the Eyre Peninsula, and a new bunker at Ports Lock has added close to 40,000t of storage capacity.

Australian Grain Export has extended capacity at its site at Rupanyup in the Victorian Wimmera to increase space for deliveries of chickpeas, faba beans, field peas and lentils, and has added some bunker storage at its Dublin site north of Adelaide.

Viterra as SA’s biggest bulk handler by far has upgraded bunkers at sites including Crystal Brook, Snowtown and Tailem Bend.

It has also made improvements at selected export terminals, including the installation of two new automated 48m weighbridges at Ardrossan, and reopening the outwards weighbridge at the Port Pirie township ship.

In a reverse of the NSW situation, WA is expected to produce a wheat crop that is 2Mt bigger than last year’s, and increases to CBH’s rail and storage capacity are well timed.

Three train sets are expected to be added to the rail fleet shifting grain for CBH from March-April next year now that Aurizon has taken over the contract from Watco to operate the CBH fleet of 28 locomotives and 574 wagons.

These trains are expected to operate in CBH’s Kwinana Zone.

“CBH is anticipating a larger than average harvest and progressing plans to ensure we can receive, store, buy, outload and market this year’s crop,” a CBH Group spokesperson.

“In addition to our 100 network sites, we are building emergency storage facilities and preparing to open non-network sites where required across all zones.”

In place are CBH approvals to build emergency storage for more than 2Mt of grain across its WA network.

“While construction has started at many of these projects, recent wet weather constraints and the volume of emergency storage will mean than civil and construction work continues into harvest.”

CBH said it has approved about 700,000t of non-network, or “surge” site storage across its network.

“Like our emergency storage projects, it will be scaled up and down as required when the harvest starts coming in.

“Extra equipment, including drive-over grids, mobile weighbridges and sampling and testing equipment, have been purchased and are now being deployed across the network.”

CBH sites where storage has already increased considerably include Hyden in the Albany Zone, where four new open bulkheads able to hold around 135,000t in total have been built.

In the Kwinana South Zone, Dale and Brookton have also undergone major expansions. Four new open bulkheads will be operational in time for harvest at CBH’s Hyden site in WA. Image: CBH Group