Big changes in crop types being planted in Canada 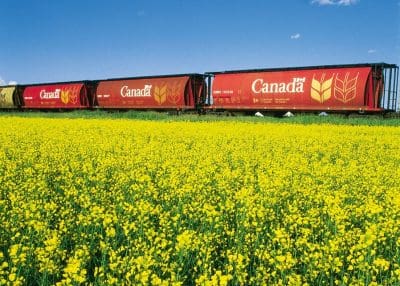 It seems that Canadian farmers have reacted to recent trends in crop prices, old-crop stocks and the disastrous Chinese canola situation.

Looking at the data in more detail, all wheat planting intentions were pegged at 10.4 million hectares (Mh).

However, there were significant changes among wheat types, with the durum area expected to see its biggest single-year drop since 2010, falling 19pc to 2.03Mh.

Conversely, the spring wheat area is predicted to increase by 12pc to 7.85Mh, the highest in 18 years. The area sown to winter wheat in the autumn fall was estimated to be only 0.50Mh, down from 0.54Mh a year earlier.

The area intended to be sown to barley came in at 2.76Mh, and the soybean area is projected to be down significantly from 2.55Mh to 2.3Mh. The latter is primarily due to poor yield results and lack of suitability compared to alternatives.

Canola is the second biggest crop in Canada, and the seeded area was forecast to be 8.54Mh in the three prairie provinces of Alberta, Saskatchewan and Manitoba. This represents the lowest area in three years and compares to a five-year average of 8.79Mh.

The Chinese embargo on canola imports has undoubtedly had an impact on planting intentions, as has the recent downward price trend. Canola is a high input crop, and with on farm stocks currently at their highest ever level, the market uncertainty is rattling the Canadian farmer.

It is highly possible that the StatsCan report could understate the swing away from canola as the farmer survey was conducted before the enormity of the China situation was known. It is entirely possible that the final area could be less than 8.09Mh.

Canadian farmers are reportedly returning expensive canola seed and chemicals and cancelling or changing fertiliser orders, as they swing acres away from canola in favour of wheat and barley.

Canada and China have been locked in a trade and political dispute since the chief financial officer of Chinese telecoms giant Huawei Technologies was arrested in Vancouver on December 1 on a US extradition request. The Chinese responded by detaining two Canadian citizens, stripping two major Canadian grain companies of their canola export licenses and has subsequently stopped purchasing Canadian canola seed altogether.

Over half of the agri-food products grown in Canada are exported, and China is one of the key destinations. Canola exports to China in 2018 were worth US$2.7 billion. Around 90pc of the canola seed grown in Canada is exported, and 40pc of that total goes to China. The loss of the Chinese market hits Canadian producers directly, and the flow on effect for the economy will be severe.

Canadian farmers are also less than happy with the response of their government. According to reports, this has become the norm under the Trudeau led parliament. Since he became Prime Minister, Canadian farmers have lost more and more access to the global grain markets on which they depend for their livelihood.

Italy has locked out Canadian durum wheat, and India has imposed punishing tariffs on Canadian pulses (they are not alone there). Vietnam has stopped importing Canadian wheat supposedly due to thistle seed contamination. And now China has placed an embargo on Canadian canola. What will be next they are asking?

Meanwhile, in Australia, the east coast drought appears no closer to an end, and winter crop production will be impacted as a result. The one exception is Central Queensland where April rainfall across the entire region has been above average or well above average, and planting of the wheat and chickpea crop is in full swing.

The Bureau of Meteorology (BOM) released a climate outlook last Friday (April 26) and they suggest that May is likely to be drier than average in eastern South Australia, Victoria, and the grain growing regions of both New South Wales and southern Queensland.

According to the BOM, the warmer-than-average days are expected to continue for the next three months for almost the entire country. Whilst this is great for crop establishment, the lack of subsoil moisture and accompanying rainfall is a major concern.

We are now well into the ideal planting window for many areas. Some growers are planting dry, but the areas are relatively small at this stage. In many districts, the appetite for risk is low after a poor 2018, and most growers are waiting for additional rainfall to provide a degree of production certainty before going all in.