A RAINY and cool September in south-eastern Australia has put chickpea traders in an awkward position that has created spikes in the cash market as they scramble to cover their nearby delivery commitments. 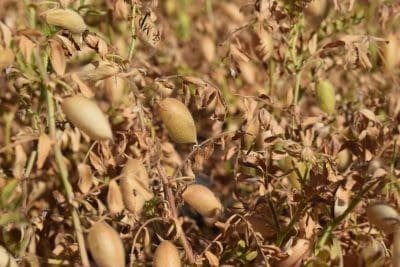 Chickpeas are coming to market off the header from the Central Queensland crop in ready supply, but at a price.

While growers have locked in prices as high as $1000 a tonne at various times since planting, the prompt cash market is paying up to $1100/t as traders look north to secure new-crop chickpeas for delivery into southern Queensland.

Dhal prices in India have continued to fall this past month.

A sense of urgency to satisfy week-by-week programming of container packing and bulk and containerised shipments has trade buyers saying that prices being paid for these spot chickpeas are “not sustainable”.

The divergence of (grower) price in Australia with (consumer) price in India is an anomaly and cannot continue.  At some point both sets of prices need to move in the same direction.

Traders expect the pressure will be on every day of every week through October, November and into December to achieve shipments to meet sales contracts and fill export slots into a sub-continent market which had run low on buffer stock, and is three months away from start of its harvest of pigeon pea, for which the desi chickpea, when split, is a reasonably close alternative.

Buyers offshore have greatest demand for Australian chickpeas in two discrete periods this season: the first straight off the header and the second for the Ramadan festival in the second quarter next year.

Traders expect values in months outside those supply windows will drift on supply-side pressure and modest buying interest.

While growers have had a nervous time waiting for pods to fill, and issues of crop husbandry such as fungicide application, the pressure is now falling on the trade, particularly through hectare contracts.

Traders who wrote business using hectare contracts have added to their risk, not reduced it, a trader told Grain Central.

In some cases, hectare contracts will give traders lower volume than they were expecting, and the counterparties to whom they’ve sold will likely require them to make deliveries of chickpeas within contract period, or wash out.

Hectare contracts give growers a set price per tonne, but give traders uncertainty on volume.

Australia has grown its biggest area of chickpeas ever this year, and most growers have forward sold tonnages at average of maybe $800/t, well up on the long-term average.

At very best, chickpea development has been slow as plants have not set and retained pods in cooler than normal September conditions. At worst, crops in some low-lying areas have drowned.

Chickpea is an indeterminate crop, so called because it has the unusual ability to withhold development or proceed with development when the plant decides it has the capacity to properly set seed and complete its life-cycle.

Pod-set in chickpeas can occur a number of times before the plant completes its life-cycle.

Climatic conditions this year have resulted in lower-than-average ripe crops at the typical dates in September and October and it is yet to be seen whether the time-of-ripeness catches up.