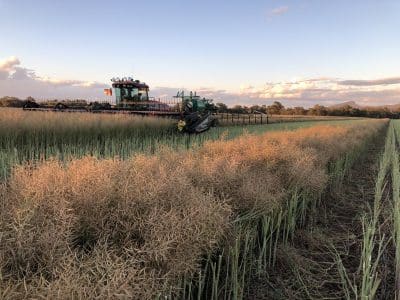 CHINA bought 49,350 tonnes, or 78 per cent, of Australia’s September canola shipments, according to the latest export data from the Australian Bureau of Statistics.

September saw a total of 63,650t of canola shipped to all destinations, down 11pc from the August figure of 71,698t, as domestic stocks run down ahead of the new-crop harvest.

Traders have already booked some cargoes of new-crop canola, with a vessel this week loading at CBH Group’s Albany Terminal to kick off exports to Europe for the season.

Domestic crushers continue to bid up for any canola of more than 40-per-cent oil in New South Wales and northern Victoria, where yields have largely been well below average, and oil content has also suffered as a result of the dry spring.

iGrain senior account manager Machallie McCormack said volume of tradable seed was limited because large tracts of the Riverina crop in southern NSW was cut for hay, and much of the harvested seed has already sold.

“We’re seeing a lot of low oil, and I’d say the average is below 40pc,” Ms McCormack said.

“The tonnage has been really ordinary, and the price in the mid $500s per tonne is pretty good historically, so growers have sold quite a lot.”

In Victoria’s Wimmera and south-west, and in South Australia’s south-east, canola crops have enjoyed good to excellent growing conditions, and their tonnage is attracting interest from crushers and traders looking to accumulate for export and domestic sales.