Multi-storey piggeries were built in China as the herd rebuilt. Photo: Yangxiang

Imports of corn and barley each reached new highs, while sorghum reached the second-largest volume on record.

Major suppliers for corn were the United States 69pc and Ukraine, 29pc; for sorghum US 77pc, and Argentina 14pc; for barley, Canada 29pc, France 26pc, and Ukraine 26pc.

Figure 1: Total imports of sorghum, barley and corn were 50.2Mt in the year to end of September 2021. The bottom chart shows imports of dried peas, cassava and dried distillers’ grains.

The import growth can be attributed to a convergence of events. Aside from the implementation of the US- China Phase One agreement, the recovery in the swine sector from African swine fever (Figure 2) favoured the use of corn in feed rations and drove domestic corn prices higher.

The run-up in prices widened the spread between imports and domestic corn, making imports highly profitable. Higher prices also boosted imports of sorghum and barley. These corn substitutes are not genetically modified, making imports and use less administratively burdensome.

Since June 2021, domestic corn prices have declined but are still above a year ago despite expectations of a record harvest this fall.

Imports of non-grain feed ingredients (NGFI) also grew from the prior year.

Strong cassava imports can be attributed to high domestic corn prices as feed mills and fuel ethanol plants may have turned to a cheaper alternative to domestic corn. Imports of distillers’ dried grains (DDGS) improved from a year ago but were small as the antidumping and countervailing duties on US DDGS remain in place. 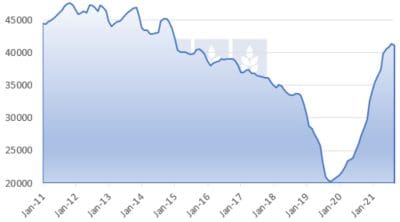 Figure 2. The number of pigs in China in 2020 and 2021 has more than doubled since African Swine Fever caused severe culling. Left axis is 10,000 head. Source: Lachstock Consulting Research and Bloomberg.