In Shanghai last week as one of the participants in the highly-successful Toowoomba and Surat Basin Enterprise Access China Trade mission, Kialla Foods managing director Quentin Kennedy sees opportunity to expand his niche business into the China market. 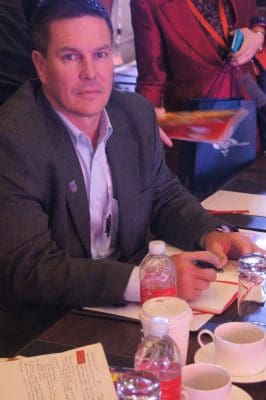 Investment company Blue Sky Agriculture took a 33 percent stake in the Kialla business in July, and as part of that expansion process, the business has invested in irrigated cropping country on the Dawson River near Theodore in Central Queensland.

Lagoona, a 1250ha farm just south of Theodore includes 620ha of cultivation, some 400ha of which is currently flood-irrigated, with the remainder yet to be developed.

Access to certified grain from the farm will help underpin Kialla’s future Certified Organic grain requirements, delivering between 10 and 20 percent of supply requirements each year.

“It’s certainly not about replacing current grain supply from other growers, but simply to help secure that supply, and build the size of the pie,” Mr Kennedy said.

Securing the business’s supply chain took on greater importance during the past two drought years.

“Last year, certified organic wheat prices were above $800/tonne. Prices have been steadily rising for the past couple of years, due to drought.”

“What we’ve seen this year, is that that has really stifled demand. There’s been push-back from some customers, and the reality is that wheat at $800/t is not sustainable for our clients, or our business,” he said

In desperation to maintain supply, Kialla last year pulled wheat out of the areas as far distant as the lakebeds in southern NSW, with a $170/t freight bill attached. On top of the grain price, it pushed the delivered price out to well above $900/t.

The extreme high prices for certified grain, and consequent drop in demand from domestic and international customers, has reduced production through the mill near Toowoomba. Last year the mill processed about 10,000 tonnes of Certified Organic grains, in total – predominantly wheat, but also other varieties.

Earlier, Kialla had moved out of some of the small-volume Organic grains in order to concentrate on wheat, but the extreme high prices experienced last year, saw that turn around.

But now, it could take 18 months to stimulate that growth in wheat-based products again, Mr Kennedy believes.

He said the prospect of the company itself investing in certified organic grain production ‘had always been there’, but it had taken the experience of the past two years to ‘come to terms’ with the strategy, and activate it.

“We initially did not want to dilute our equity in Kialla, and plough that into a farm with a JV partner, but we believe it’s a sound strategy, and the writing was on the wall,” he said.

“We have to be able to give some guarantees over supply to our customers, and this is an ideal way to do it.”

“And we have found an excellent venture partner in Blue Sky. Michael Blakeney (investment director for Blue Sky Water Partners, also a participants in last week’s TSBE Access China trade delegation to Shanghai) has great experience in irrigation and the management of water, through the water fund that Blue Sky runs,” Mr Kennedy said.

“We were looking for an investor that could bring a bit more than just money to the table, in terms of expertise and possibly, markets – and that’s what we’ve been working on.”

So is this Theodore farming venture the first step in a series of grain production ventures to support the Kialla business?

“With the capital that we’ve raised, we’ll look at a little more expansion in the farming side,” Mr Kennedy said. “But grain purchased from other certified organic growers will always be the mainstay of our business.”

Kialla first came to China two years ago for a trade fair, and was a keen participant in last week’s TSBE Access China trade mission. 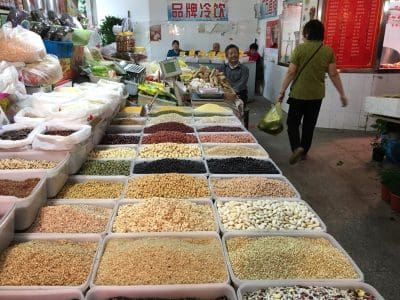 Grains, pluses and legumes on display in a traditional market in Shanghai last week

Currently the company has an export presence in New Zealand, Singapore, South Korea, Japan, Indonesia, Taiwan, Malaysia, Italy and the US.

“We’ve done no business here in China as yet, but it’s hard to ignore the sheer size of China as a potential market for any food product – organic or otherwise,” Mr Kennedy said.

“It’s early stages, as far as the organic segment is concerned, but the opportunities are definitely there, and we have made some excellent contacts during this visit.”

“At this point, the Chinese appear to be chasing ‘Australian’, which they see as clean and green, rather than necessarily ‘organic.’

“But we definitely see a market here for organic, and especially whole-of-chain certified programs.” Some of that may in fact be through ‘third-party’ arrangements. Kialla has a customer in Malaysia, for example, which sells organic wheat noodles into China, which has a requirement for China-certified organic wheat flour like that produced by Kialla.

“But we now have some good contacts here, and will try to capitalise on that opportunity for direct this week,” Mr Kennedy said while in Shanghai. 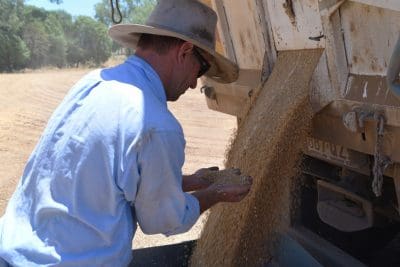 First irrigated wheat harvest was completed on the farm last week, and the enterprise also has smaller plantings of rare grains like Kamut, an ancient Egyptian wheat variety, nearing harvest.

“Rob will continue to be a valuable resource to the company and the general industry with his experience and practical knowledge of the farming and grain industry, as he transitions the Central Queensland farm to fully certified organic status,” Mr Kennedy said.

Kialla sources more than 20 different grains from a supplier base of certified organic growers, processing organic grains into a wide range of organic baking flours, specialty flours, premixes and other cereal-based value-added products. These are used primarily for manufacturing and artisan bakeries, as well as hospitality services and speciality food retailers.

Within the milling complex, the company uses a mix of modern and traditional milling techniques to produce organic flours, kibbles and meals.

The company has built a network of certified organic grain suppliers and continues to expand its supplier network as the business grows.

The Kialla Group contracts grain, both fixed tonnes and area contracts, sharing production risk with the grower. Contracts are done to industry best practice with clear and concise details for both buyer and seller to adhere with. The company prides itself on its ability to deliver payment terms accurately and on-time to suppliers. Contracted grain is purchased to receival standards based on industry-accepted national standards.

All Kialla products are certified organic by Australian Certified Organic and are produced under the SQF Quality Assurance system. The company also holds organic certifications for China, Japan, Korea, and USDA.