China the hero market for Australian barley and wheat

CHINESE demand for feed barley and mid-protein wheat has been a godsend for marketers of Australian grain faced with the task of shipping a massive export surplus into a depressed world cereal market. 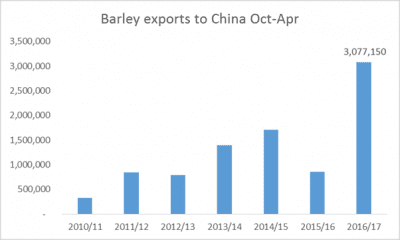 China has by far been the biggest export destination for current-crop Australian barley, easily eclipsing other destinations like Saudi Arabia and Japan.

“This level of demand from China has been a key catalyst to the barley market performing strongly post-harvest.”

Mr Crundall said without China, Australian barley would have to be priced more aggressively into Saudi Arabia, traditionally a key bulk market, in order to clear storages before the 2017 harvest started.

“Demand normally drops off around this time each year as Black Sea origin barley comes to the market, so it will be interesting to see if this pace can continue into China for the remainder of our season.”

Indications are that China is switching some of its prompt-shipment interest to Ukraine.

Trade sources report this has been evidenced by a drop-off in shipments of Australia’s total Chinese barley exports to 200,000 tonnes in April, down from around an average of 700,000t per month in January, February and March.

Mr Crundall said China’s demand for Australian wheat between October 2016 and April has been strong relative to the past couple of seasons. 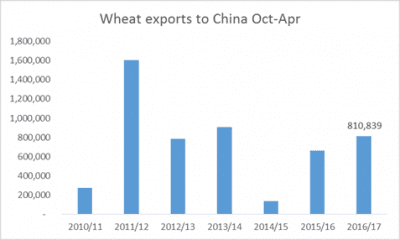 “Recent demand has been primarily been for ASW1, which is perfect when you consider the large majority of the 2016/17 wheat crop was ASW1.”

Mr Crundall said he believed a large amount of wheat was still being held on-farm by growers, and much of it was likely to be ASW1, a sentiment echoed last week by GrainCorp CEO Mark Palmquist.

China typically sources protein wheat, which they have been able to source from other origins including the US and Canada this year.

“Logistical issues in China getting grain from the northern growing regions to the southern consumptive market have also increased demand for import Aussie wheat.

“The Australian wheat balance sheet needs this sort of demand to ensure we hit the necessary export volume we require to avoid a big increase in our carry-out stocks going into 2017-18.”

In a media release this week, South Australian bulk handler, Viterra, said its grain exports have continued at a record-breaking pace.

“Over 500,000 tonnes of grain has been shipped in the first half of May alone. We’ve shipped 4.8Mt already this season, plus moved another 630,000t in containers and to domestic third parties.”