A kind spring in parts of Europe has seen USDA lift its production estimates for EU wheat and barley. Photo: Vincent Guyot, France

THE United States Department of Agriculture (USDA) has pegged China’s barley imports for 2021-22 (Oct-Sep) at 10.6 million tonnes (Mt), up from the record 10Mt forecast last month, and 1Mt above the 9.6Mt forecast for the current trade year.

In its ‘Grain: World Markets and Trade‘ report released alongside its June World Agricultural Supply and Demand Estimates (WASDE), USDA said China has been importing most of its barley from Canada, the EU and Ukraine.

This is being malted for its beer industry, and used as a substitute for corn in feed rations, particularly in southern China.

“While the anti-dumping and countervailing duties on barley from Australia remain in place, China has been successful in securing alternative sources for barley,” USDA said.

“Meanwhile, barley from Australia has found new markets around the world, primarily in South-east Asia, the Middle East, and Mexico.

“In the Red Sea, ships carrying barley from the EU and Ukraine to China are crossing paths with ships loaded with Australian barley destined for the Middle East.

“These trade dynamics are likely to be in place for a few more years due to China’s five-year action on barley from Australia.” 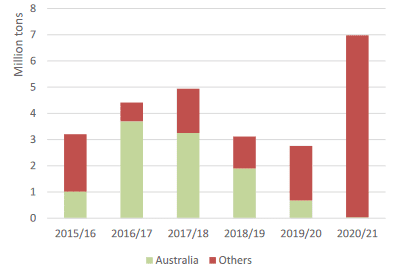 USDA has increased its production estimate for EU barley by 700,000t to 56Mt, largely on improved outlooks for France and Germany.

The global wheat outlook for 2021-22 is for larger supplies, higher consumption, increased trade, and higher stocks.

Supplies are projected to increase 4.3Mt to 1088Mt, mainly on higher production for the EU, Russia, and Ukraine.

World production is projected at a record 794.4Mt, with the EU crop now pegged at 137.5Mt.

This is up 3.5Mt from the May estimate thanks to recent beneficial precipitation across northern and central Europe.

The largest increases are for Germany, France, and Romania.

USDA has lifted its estimate for Russian wheat production by 1Mt to a record 86Mt.

The estimate for Russia’s spring wheat crop has been raised based on higher area as forecast by Russia’s Agricultural Ministry.

Continued favourable weather has piled 500,000t on to the Ukraine crop, now seen at a record 29.5Mt.

Projected 2021-22 world consumption has been raised 2.4Mt to a record 791Mt, primarily on higher feed and residual use by the EU and Russia because of their increased domestic supplies.

USDA estimates for Australia’s 2021-22 wheat are unchanged this month, with production at 27Mt and exports at 20Mt.

The outlook for 2021-22 US wheat this month is for larger supplies, higher domestic use, unchanged exports, and slightly lower stocks.

US feed and residual use has been raised 5pc from the May estimate based on higher supplies as wheat is expected to be priced competitively with corn in the summer months.

Cut to US corn stocks

This month’s 2021-22 US corn outlook is for reduced beginning and ending stocks to reflect projected increases in corn exports and ethanol use.

Brazil’s corn production for 2020-21 is reduced on lower yield expectations for second-crop corn, based on below-normal rainfall in the Centre-West and South during the month of May.

Partly offsetting this is greater indicated area for the second and third crops.

For 2020-21, Brazil’s corn exports are lowered for the marketing year beginning March 2021.

Foreign corn ending stocks for 2021-22 are raised relative to last month, mostly reflecting increases for Pakistan and South Africa that are partly offset by a reduction for Canada.