Iraq can now be added to the list of consumers that have been forced to pay the relatively higher wheat market. Tendering for half a million tonnes in Dec/Jan also created some interesting relative values. On paper that tender should have attracted some Aussie wheat offers but, given the rainfall outlook, the trade would be a little nervous about exposing themselves to an already tight shipment window.

Wheat shipments for the 2021-22 season reached 16.6Mt from Russia – down 16pc from the same time last year according to the Federal Center of Quality and Safety Assurance for Grain and Grain Products.

Malaysian Palm oil exports jumped 26.63pc for the first half of Nov, which pushed futures higher, according to Intertek.

Pakistan flour millers have had enough and have gone on strike. The PFMA (Pakistan Flour Millers Association) announced that the millers of Rawalpindi division would down tools on 15 November in response to not being giving their government-promised wheat quota.

China has announced plans to change the country’s seed regulations. It would allow farmers to grow genetically modified (GMO) corn.

The Aussie dollar increased on data that China’s economy performed better than expected in October. The Australian Wage Price Index is out on Wednesday with the NAB expecting to see a 0.6pc increase, q/q which would set the y/y growth at 2.2pc – this vaguely pegs wages back to pre-pandemic rates. 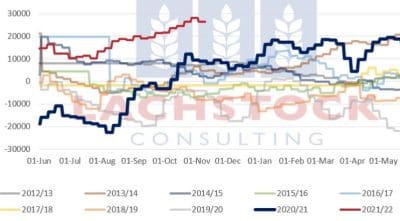 Barley was also bid firmer to growers and the trade-to-trade sellers are seeking higher bids. We continue to see new- and old-crop liquidity trade on the online exchanges to fulfill the nearby shorts in the export and domestic market.

Pulses caught a bid yesterday and have been stronger w/o/w. Faba beans, lentils and peas through SA have all been stronger with a number of exporters bidding to meet bulk loading vessels and containers nearby. Containers still remain very tight even though there’s been a delay in the pulse harvest through the South Australian pulse regions and into Victoria’s  Mallee and Wimmera regions.

Headers continued to get going yesterday through the parts of NSW where they could get back on to paddocks, including Wee Waa, Croppa Creek, Rowena and south into parts of central NSW.

Canola windrowing has kicked off for southern NSW and most parts of Victoria now, with some good feedback on how it is coming off.  Here’s hoping weather is kind to growers while their canola is sitting in rows.