Wheat was good for a couple of cents last night in a US market being dragged up by soybeans which were up 17c.

The oilseed complex has a few dynamics playing at the moment which started with Malaysian palm oil surging to new highs yesterday on reduced production and smaller stocks which was enough to kick soybean oil and consequently soybeans along.

Canola was pulled along in this tide but also showing some independent strength with China and Japanese crushers noting improve crushing margins for Canola relative to Soybeans.

Wheat had little news to go on and the fact corn didn’t react to the sharp rally in beans gave it a limited kick.

The ag ministry in Russia called the all grain harvest 113 mil which was up from 110 mil and ABARES in Australia increased its export forecast from 17.4MMT to 18.4MMT, noting that “in China, wet weather hindered the harvest and quality of winter wheat.”

Despite massive stocks they are hopeful that Australia will capture a bigger share of their required “quality” wheat imports, but historically when China chases pure quality they typically purchase more high protein Canadian wheat rather than ASW/APW, so we will see. Lachstock SND will be out this week.

The corn market came within sight of its monthly high but experienced some resistance to push above it from a technical perspective.

The trade here is still debating the potential of a sharp drop in conditions similar to 2010 where yield dropped dramatically in Sept/Oct but looking back the conditions are holding on better this year than 2010.

For Soybeans along with the boost from the oil side, demand remains robust and the US weather is potentially turning too wet.

In Australia so far, the heavier rain in Qld remains in a thin band pushing north west of Miles where the heavier falls of above 30mm are, but is pushing East. As we move south from Miles all the way to the border and east, most areas are up between 8-15mm and it’s still raining.

There has been an inch through that West Wyalong region down to Wagga and Victoria is about to start to rain as we speak. BOM map below for rain in the last 24 hours. 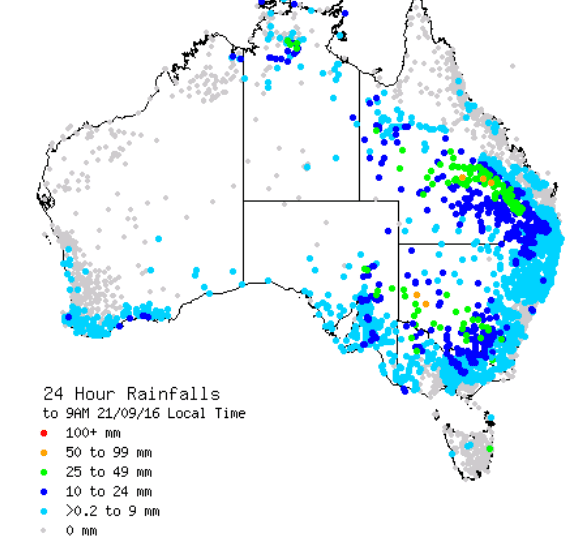