Lower for grains, mixed for oilseeds. 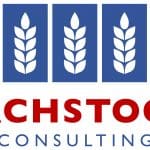 Wheat finished US13 1/2 c/bu off the day’s highs, closing below key technical support, which had broken resistance in Friday’s session.

Wheat rallied to a point which couldn’t uncover new buying. Weakness in corn and beans, a stronger USD and negative macro-environment prompted a sell off.

US wheat has priced itself out of global export business, so it’s a question of whether futures sell off further to buy demand, or whether Black Sea and European values catch up.

After the close the crop conditions’ report had winter wheat at 38pc good to excellent from 36pc.

Dry conditions in the Black Sea have persisted, which should become a focus soon enough.

The weather outlook in Canada has improved, while the jury is still out for Australia.

Further chart strength is needed immediately in order to prevent a new downtrend. The fundamentals in wheat remains supportive, but Black Sea production could turn it on its head, if conditions improve significantly.

Corn found early strength from wheat.  It gapped higher to open the night session, but selling set in as the day unfolded, as speculation emerged about crop conditions and the likely effect of a stronger US dollar on export demand.

The USD index was up 0.68pc as macro weakness prompted safe-haven buying.

Export inspections came in at 1.705 million tonnes (Mt), which is tracking almost 12pc ahead of last year. The crop conditions report released after the close had corn 92pc planted vs. an average of 90, while conditions came in at 79pc good to excellent vs. last year’s figures of 65pc.

The corn balance sheet still has a lot going for it, in the US and abroad, but current conditions are not enough to prompt new buying and could force some longs to question their resolve.

Soybeans finished lower, after showing early promise in line with wheat and corn.

It was a big day for macros with economic crisis concerns mounting for Italy and Spain.

On top of this the US government has flipped the lid on China trade negotiations announcing a 25pc tariff on US$50 billion worth of Chinese goods. This cast a negative shadow over beans with the market concerned about China’s reactions to these new measures.

Truck strikes in Brazil that have been causing major disruptions to local processing and vessel execution have apparently halted, which should see Brazilian meal premiums catch up with Argentina and the US.

Weekly export inspections came in at 576,400t which was below market expectations and sees beans tracking 9pc below last year’s figures.

Soybean meal was fractions lower -$0.1 per tonne, while soy oil was down 12 points.

Canola managed a higher close, despite the turmoil elsewhere, thanks to a stronger lead from Europe and dryness concerns in Canada.

Aussie markets were well bid yesterday, thanks to higher futures and a sharp alteration in the longer-term forecast that had initially called for 100mm of rainfall in NSW.

Growers were out and about in Victoria yesterday with some reasonable rainfall giving them more confidence to part with physical in both new and old crop.

WA conditions are reasonable with good rainfall last week and more in the forecast.

NSW is still a major concern with nothing of substance in the short to medium term forecasts.

If we get to the middle of June without a significant downfall in NSW, then it’s time to get heavy on the production cuts there.

Consumer markets in NSW supported Victoria old crop values as they increased coverage with no mid-term price relief in sight.