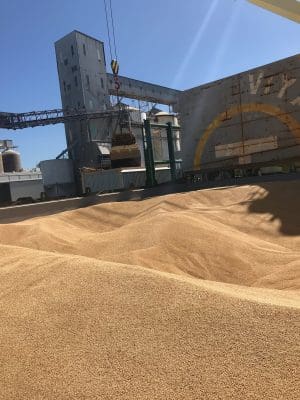 Bulk grain from southern Australia is transferred from a Handymax vessel to a storage facility leased by BCM in Brisbane.

BCM principal, Stuart Tighe, said the company took the step of leasing grain storage space in Brisbane when it became evident that sea freight was more economical than road freight as a means of getting grain to Brisbane’s grain consumers.

“While ever the differential from South Australia or Western Australia to the Brisbane market is around $100 a tonne, the figures will stack up to bring it around by sea,” Mr Tighe said.

“We’ve done two vessels since January, and we’ve got another couple on the books.”

All three BCM lease sites are on the northern side of the Brisbane River, and have been able to outturn grain to malting, poultry and milling consumers in the Brisbane metropolitan region, as well as feedlots and other end-users as far afield as the Darling Downs.

“I’m a big believer that the storage provider needs to be independent, and we have very few to none in this northern region.

“We’re doing this because we felt there was an opportunity for a business like ours that did not have a conflict of interest.

“Independence is our point of difference, because we’re not buying or trading.

“We’re simply providing a service to the trade in unloading and distributing grain into the southeast Queensland market.”

Grain being handled by BCM has been arriving in Handymax vessels which carry around 35,000 tonnes of grain in several hatches.

This allows one shipment to include malting barley, feed barley and wheat.

The cargoes have so far brought West Australian, South Australian and Victorian grain into Brisbane.

“The bigger traders are doing the shipping stem, and we’re providing the service to unload the boat and store it, and get it to its destination.

“There are another couple of vessels on the books which will take us to August-September, and there’s even talk of something in January.”

Since November, Grain Central has been reporting the arrival by sea of grain into the Brisbane market, as often happens in seasons like the current one, when an adverse growing season leaves it chronically short of wheat and barley.

This turns the Brisbane market into a de facto export destination for grain from southern Australia ports.

Other companies including Wilmar Gavilon, which owns and operates the Queensland Bulk Terminals facility on the southern shore of the Brisbane River, have brought cargoes or part-cargoes into the Brisbane market in recent months.

BCM is the grain logistics arm of the Tighe family’s Boolah Partnership, and operates storage and handling facilities in the Moree and Gunnedah districts of northwest New South Wales.

Boolah Partnership is also a large-scale producer of winter and summer crops in the Moree district.

In 2016, Boolah took the unprecedented step of freighting two train-loads of chickpeas direct from its Milguy property to Newcastle for export.