CHS Broadbent has increased its storage and handling capabilities with the purchase of the Cargill-owned GrainFlow site at Jondaryan on southern Queensland’s Darling Downs. 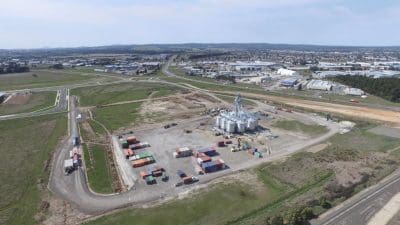 The Jondaryan site received its first grain under the CHS Broadbent banner early last month in the latest expansion by an up-country trading and logistics business into servicing export as well as domestic markets.

CHS Broadbent managing director, Steve Broadbent, said the addition of the GrainFlow Jondaryan site added strategic value to the company’s northern operation, which was centred on its Toowoomba container-packing facility.

GrainFlow’s Jondaryan site opened in 2003 with a storage capacity of 130,000 tonnes. It fronts the Warrego Highway and the West Moreton rail line, which both connect the site to Brisbane port facilities.

“The sale was part of a review of our storage business, based on our strategy and customer-demand profile,” Cargill corporate affairs manager, Peter McBride, said.

CHS Broadbent already operates storage and handling sites at Lakaput and Lake Bolac in Victoria, and Moree in northern NSW.

The company is close to finishing an expansion at its packing facility at Ballarat, on the southern edge of Victoria’s grainbelt, which has already exported more than 100,000 tonnes of containerised grain to customers across Asia.

CHS Broadbent describes itself as a “fully integrated supply-chain business with global connections” enhanced by its place in the global network of CHS Inc.

This US-based company is owned by shareholders including growers and co-operatives, and took a 50-per-cent share in the Broadbent operation in 2014.

CHS Broadbent runs a sizeable transport fleet in Queensland and Victoria, and has grain-origination offices in Ballarat, Moama, Moree and Toowoomba.

This has allowed it to accumulate and truck a lot of grain quickly, as was seen in last year’s record harvest.

Another Victorian-based trading and logistics company, Riordan Grains, also shifted a record amount of grain from the previous harvest, and exported in its own right by using a mobile ship-loader on the wharf at Geelong.

Outside its grain and trucking operations, it has linked up with Chinese phosphate producer, Weng Fu, which is using its storage at Corio near Geelong as a depot for fertiliser distribution.

Mr McBride said Cargill had no other GrainFlow storages for sale, and would continue to operate multiple sites which allow the US-based trade giant to participate in Australia’s export, domestic and packing market.

“We have undertaken significant capital investments in our network over recent years, and will continue to do so, going forward, as opportunities present.”

As the largest bulk handler operating across Australia’s eastern states, GrainCorp has undertaken a similar strategy by offloading some of its smaller sites and expanding what it has deemed to be strategic locations.

These include Yamala near Emerald in Central Queensland, and Cunningar on the south-west slopes of NSW.