HOME-BAKED bread is making a comeback in kitchens across Australia as householders of all ages test out their skills in the age-old art during COVID-19 lockdown.

It has prompted an unprecedented demand for flour and bread mixes at the consumer level, and millers and packagers of all sizes have stepped up to the challenge.

Among them is Kialla Pure Foods at Greenmount on Queensland’s Darling Downs.

As one of Australia’s leading organic grain processors, it has hired six additional staff members to help meet demand for its products as the nation moves to cooking more at home.

Kialla managing director Quentin Kennedy said orders started to increase in March, when he saw a 300-per-cent increase on demand from previous fortnights.

“It was probably one or two weeks after the rush on flour in the main supermarkets that we started to see it move into our market in independents and healthfood stores,” Mr Kennedy said.

“We very quickly moved to ramp up production to catch up with demand.”

“The new infrastructure, which has only just been commissioned, allowed Kialla Pure Foods to meet new demand for at-home baking and cooking products,” Queensland Agricultural Industry Development and Fisheries Minister Mark Furner said in a statement.

Mr Kennedy said the additional equipment has helped Kialla service increased demand brought about by COVID-19 for all Kialla products, including 50 different kinds of grains and flours.

“We’re in a lucky position because COVID-19 has brought the focus back to food and food production.

“For a long time people considered food as a given, but this has changed their views.

“With working from home, we’ve seen a wave of home baking occurring, and an increase in demand for flours.

“We’ve also seen a lift in the export side, which has driven demand and a fundamental shift in consumer-value perception.”

Provenance Flour and Malt is a Sydney-based business which has developed pathways for single-origin and single-varietal grain for use by artisan bakers and craft brewers. 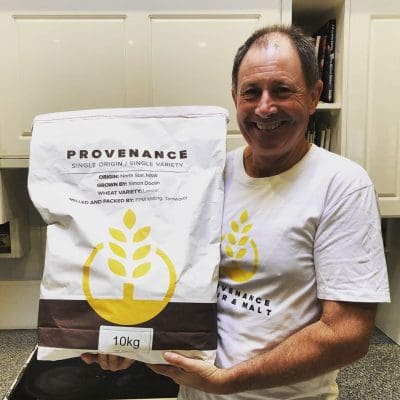 Provenance principal John Campbell with one of the new 10kg bags now available to consumers. Photo: Provenance Flour and Malt

Provenance principal John Campbell said a surge in demand for flour has prompted the company to start packaging flour in 10 kilogram bags, and increased its production of 2kg bags, alongside the standard out-turn of 20kg bags for commercial bakers.

“We were looking at doing more bagged flour at retail anyway, but we have leapt from concept to actual retailing in the blink of an eye now because of coronavirus,” Mr Campbell said.

“I hope it’s part of people looking more at food security and the value of local production, and people’s habits changing in the long term.

“It’s also a great time to look inwards at our 100pc Australian grown and produced products and support the farmers.

“There’s a fantastic community feel out there as people think about where their food comes from, and the outstanding quality that is available to Australian consumers.”

“Bags of that are going out as far as Nappa Merrie Station.”

Provenance Flour is also available at selected outlets in capital cities and regional centres, with FPM Milling at Tamworth doing the larger bags, and a contract-packing operation supplying the 2kg bags.

The Manildra Group is Australia’s largest flour miller and, like all of Australia’s major millers, has responded to the jump in demand for flour and bread mixes brought about by COVID-19.

On its Facebook page this week, the company said it had stepped up its milling of local flour, and was operating its sites “around the clock” to meet demand.

“Since the coronavirus pandemic, we have significantly increased our retail-flour production by more than 50pc, working with retailers and wholesalers to restock the nations supermarket shelves.

“Furthermore, we’re delighted to announce that we are installing additional retail-packing capacity at our flagship Manildra Flour Mill.

“This new installation will produce more than 50 million 1kg bags per annum.

“Installation is occurring by the end of July this year.”

Also at Manildra in the central west of NSW is MSM Milling, a family-owned operation which crushes around 110,000 tonnes of canola per annum, and exports about 30pc of its oil.

Company director Pete Mac Smith said he hoped “onshoring”, or the value-adding of Australia’s primary produce, became a topic for discussion as a result of COVID-19.

“One of the positives of coronavirus is that there might be a mature debate about food security, where we come to value our local food production more than we have done,” Mr Mac Smith said.

“I hope onshoring becomes one of the most spoken words as we look to the future.”

“The quality of our produce and the security of our supply chain have given us faith in our food systems that not all countries have.

“We’d all love to see us produce and sell more value-adding in agriculture.”

“I hope onshoring becomes one of the most spoken words as we look to the future.”

Mr Mac Smith said MSM Milling had seen increased demand for oil for use in home cooking in Australia, China and Taiwan as a result of COVID-19. “As the COVID-19 crisis continues to affect how we interact, work and shop, consumers are looking for new and easy ways to connect directly with local business,” Food SA chief executive officer Catherine Sayer said.

“The panic buying we saw around a whole lot of staple products went on for some weeks, and people now seem to be adjusting to the new normal.

“The online space has really changed, and we introduced an online portal to signpost consumers to our members.”

While major supermarkets have done a sterling job in terms of responding to altered consumer demand, some have not been able to cope with online orders, and this has pushed some demand to smaller bakeries, butchers and other food outlets, especially if they can home deliver.

“There needed to be another way for people to get food, and this is it.”

Whether it stays once sit-down dining venues are able to reopen remains to be seen.

“A lot of them have changed their business models.

“They’re doing online ordering, takeaway only and delivery, and some of them have flipped their menus to provide more home-style food.”