PRICES for wheat and barley delivered Darling Downs have hit their peak this week at $400 per tonne as grain shipped into Brisbane from Port Adelaide makes its way into the market. 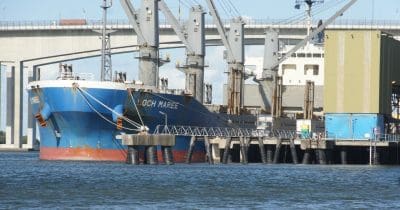 Further shipments like this load of South Australian grain which berthed in Brisbane in November are believed to be hitting the southern Queensland market.

Traders say feed barley and ASW wheat is being offered free on truck ex Brisbane port at $377/t, which has put a cap on the market after its rise over recent weeks based on the tight domestic feedgrain market.

“It costs about $26 a tonne to get it on to the Downs, and that’s competing with what people are having to pay to get grain trucked up from southern New South Wales,” a trader said.

“There is certainly grain coming up from Brisbane on to the Downs.”

Several cargoes of South Australian wheat, feed barley and malting barley, all for use in the Brisbane metropolitan area, have been consumed since November, when the impact of disappointing winter cereal yields hit the southern Queensland market.

The rising Downs market has now hit the ceiling created by export parity, based on the price of southern Australian grain on a per tonne fob basis, plus the cost of sea freight to Brisbane and road-freight to the Downs, meeting the cash price of grain delivered by road from NSW.

Traders have said sorghum delivered Downs was now trading at $380-$385/t delivered Downs, with the Dalby Bio-Refinery the volume buyer as it sought to cover its grain requirement over the coming months.

Alliance Grains principal, Luke Walker, said some demand from the poultry sector was also evident in the market.

“Feedlotters won’t buy sorghum at these levels — it’s too expensive, but others have had to step in and buy, and the crux of the matter is just how dry it is in NSW,” Mr Walker said.

NSW regularly produces 5-8 million tonnes of wheat, and precious little of it has been planted to date as the break for most growers is yet to arrive.

“Rain in early June would fix that, so we’ve still got time, but there’s panic in this market.”

GrainTrend director, Peter Howard, said the trade would struggle to accumulate bulk sorghum shipments out of Brisbane and Newcastle due to the strength in the domestic market.

“It’s such a tight market, and what’s happening between the US and China has had a huge impact,” Mr Howard said.

While China has become a volume importer of US sorghum, it’s buying this year to date has fallen away on the back of the Chinese Government imposing a hefty bond based on the total value of the shipment.

“Buyers in China are pressing for sorghum to make wine, but it’s going to be hard to get.”

Mr Walker agreed, and said new bulk export business to China out of the feverish NSW and southern Queensland markets were unlikely.

“You’d be dancing with the devil to be accumulating for a bulk shipment at these prices.”

According to the latest Australian Bureau of Statistics export data, Australia shipped its first cargo of new-crop sorghum in March, 30,728t to China.

Other sorghum exports for the human-consumption market were containerised, and totalled 49t to Belgium, 949t to The Philippines, and 814t to Taiwan.

Sources have said more exports to China of Darling Downs and northern NSW sorghum were likely, but they would be shipped in containers rather than bulk cargoes.

Traders have said sorghum delivered to the port of Mackay is currently trading at $360, more than $40 below the equivalent nominal Brisbane price.

This means further 2018 export cargoes are likely out of Mackay and possibly Gladstone.

Seeding of Queensland’s 2018 barley, chickpea and wheat has started, mostly on the Northern Darling Downs which had 15-20 millimetres of rain in recent falls following heavy rain in March.

However, the Central and Southern Downs are in need of 40-50mm of rain to get planting, and much of NSW requires considerably more.