RAIN in the past week over much of southern Australia has further improved production prospects for its winter crop and put downward pressure on wheat and barley prices, but grain in northern New South Wales has traded flat to higher as concerns about dry conditions continue. 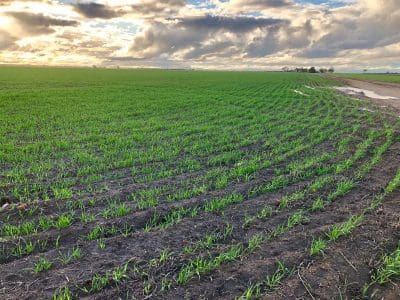 Dimboola has had 41mm of rain in the past week which will consolidate yield prospects for established crops and assist germination of others. Photo: Bridie George, AWB

In southern markets, current-crop and new-crop prices have fallen $5-$10 per tonne.

CloudBreak director Ed Scamps said while some pockets of South Australia could do with more rain, yield prospects in many districts had improved considerably, and inspired confidence to forward sell a limited amount of new-crop.

“A lot of the Mallee got 15-18 millimetres which it really needed, and parts of the Yorke Peninsula got 40mm plus.”

“The market’s been torn between what’s going on in the US, and the reasonable start for us in South Australia.

“In new-crop, growers have now got more confidence about doing some forward selling.”

Mr Scamps said some growers who forward sold at $300/t this time last year missed out on the rally created by the NSW drought, which has seen hundreds of thousands of tonnes of South Australian grain supply NSW’s milling and feed markets.

“South Australian growers have got an eye on the NSW market.

“A lot will depend on NSW and how their season pans out.”

In the north, the sorghum harvest in Central Queensland (CQ) has started, with grain being accumulated for at least two bulk cargoes for shipment over July and August.

Some CQ sorghum is expected to make its way into piggery and poultry rations, but is not expected to price into Brisbane.

In southern Queensland, sorghum has been meeting limited demand, with poultry mills continuing to focus on WA boat wheat ex Brisbane, which has been trading at $400/t free on truck (FOT) for July, roughly $5/t over barley.

ADM trader Peter Dorney said demand was limited in the southern Queensland market for all grains.

“There don’t seem to be a lot of buyers at the moment, which points to the feedlots having good coverage.”

In the delivered-Downs sorghum market, strongest bids are currently at around $355/t, with some buying for a limited amount of container exports creating the occasional spike in values.

Prices on the slopes and tablelands of northern NSW have rallied in the past week based on a resurgence in grazier demand.

At Armidale, Broun & Co principal Wal Broun said rallies in US markets, as well as local concerns about crop and pasture growth as winter sets in, had lifted the market.

“We’ve got our own premium for drought, and with reduced yield expectations in the US corn crop as well, wheat and barley have gone up $25-35/t in the past month.”

The USDA World Agricultural Supply and Demand Estimates report clipped 10 bushels per acre from the US corn-yield forecast as a result of excessively wet conditions.

“That’s a big cut. The market had already factored it in, but the USDA report verified it.

“We might stay up here at these price levels until wheat and barley start flowing out from the Black Sea ports.”

While farmers in northern NSW could plant wheat and barley until mid-July, Mr Broun said the looming closure of the planting window was limiting the region’s potential production of winter grain.

“This shortening of the planting window is having an impact, and causing a gradual reduction in what can be produced.”

Northern NSW’s graziers and feedlots are continuing to buy WA barley ex Newcastle, and are also sourcing roughage and supplements to feed to cattle and sheep.

“Cottonseed is coming up into the New England from the gins, and we’ve got wheat and barley straw, oaten and wheaten hay, dried distillers’ grain, failed sorghum, sorghum and corn stubble and rice straw as well as corn all coming in.”

The FOT July Newcastle market is currently sitting at around $395/t, up around $30/t in the past month, while wheat as sought by major feedlots is closer to $400/t.

“Graziers are committed to carrying through to the spring the stock they have on now, and some have bought barley for as far out as August delivery.”

Many grazing or dual-purpose cereal crops have been planted, but are in need of rain and mild weather to enable them to support livestock.

“The market’s pretty thin for sorghum, and it’s going mostly to poultry.”

In the cottonseed market, paddock demand has been seen as steady, and feedlot customers have reduced some exposure to a possible drought rally by booking forward tonnage several months out.