BARLEY prices have continued to drift lower in the past week to a level believed to be on export parity for the first time in many months.

Traders say this has increased its discount to wheat, and Western Australian barley stockpiled in Brisbane is now being bought in considerable volume for feedlot rations on the Darling Downs.

These stores of barley are being offered at competitive levels as some traders look to clear their books before more WA wheat and barley arrives in Brisbane, and end-users book coverage before the barley market firms.

While buying from China – now busy with its anti-dumping investigation into Australian barley pricing – is unlikely in the short term, the next tender from Saudi Arabia could well push WA free-on-board (FOB) values higher.

“Barley has come under pressure in the past few weeks, mainly because of what’s happening with China, and the Saudis have delayed their most recent tender,” Robinson Grain trader Adam Robinson said.

“There’s quite a bit of barley unsold in WA, but we’ve gotten to a base price now which is starting to buy more demand.

“WA barley is now very competitive with barley around the world.”

Long positions from the trade are said to be offering delivered Darling Downs barley at a $5-$10/tonne discount to the free-on-truck (FOT) Brisbane market.

Other sources said up-country barley values had fallen by around $20/t in the past three weeks, and its discount to wheat was more like $55/t, based on delivered Downs wheat for Feb-Mar at $435/t, and barley at $380/t.

AgVantage Commodities broker Josh Brown, Narrabri, said some barley was being sold at around $395/t ex farm in the Moree and Narrabri districts.

“Freight is a killer around here,” Mr Brown said.

This reflects the shortage of feedgrain available between Forbes and Moree for end-users who are more than around 300 kilometres from Newcastle and Brisbane, where WA grain is being offered FOT.

Sorghum from northern NSW has been trading at up to $360/t into northern NSW depots, $375/t into Tamworth, and $390-395/t Newcastle, with most growers happy to sell some tonnage at these historically high prices. 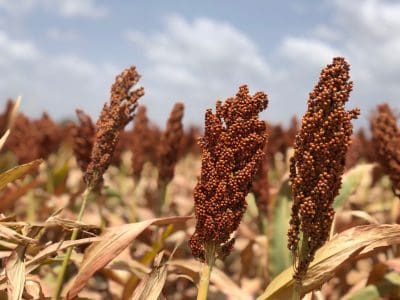 Average crops are harvesting from heads reasonably well filled such as this Darling Downs sorghum in February 2019, though paddock yields have been compromised by lower-than-ideal plant density.

It is trading at around $350-$355/t on-farm northern NSW and on the Downs, with northern NSW sorghum still making its way to southern NSW by truck and train for use in the poultry sector.

“Sorghum is buying demand; the crop is getting smaller by the day,” Mr Robinson said.

Recent rain which has brought devastation to northern Queensland has largely failed to extend into Central Queensland (CQ), which looks unlikely to get much more of its intended sorghum area planted.

Light test-weights and high screenings, the result of a remarkably dry summer, are common in sorghum crops now being harvested in northern NSW and southern Queensland.

This has knocked a considerable number of crops out of the top grade, and into SGM2 at a $10/t discount to SGM1.

Instances of high-screenings had occurred because severe lack of moisture had prevented crops from filling grain properly, instead the plant had shut down.

The national sorghum crop had been seen at a potential 1.7 million tonnes (Mt) two weeks ago but is now more likely to weigh in at 1.5Mt maximum, unless widespread general rain falls in CQ by the end of this month.

Straw, hay, grapemark and almond hulls are all being purchased by feedlots in Queensland and northern NSW to add fibre to rations.

Soybean meal is offered at $615/t FOT Brisbane, is in ready supply and  has been tracking around this value for some months. Palm-kernel expeller had been trading at around $325/t Brisbane, but fresh stock was not available from the Brisbane port until late March.

Almond hulls are trading at $370-$380/t delivered to the Moree district in coming weeks, when new-crop becomes available.

While almond hulls in previous seasons have traded under $100/t FOT, through this drought they have been priced at least double that. Road freight cost is typically higher than the price of the hulls ex store.

This is due to drought-driven demand, as well as 50-per-cent reduction in supply from major processor Select Harvest now using around half its annual hull production of roughly 30,000t for energy co-generation.

Picking of Australia’s new-crop cotton has started in CQ, with the Emerald gin being the first to fire up for the season.

Trade talk says CQ seed will be trucked to the Darling Downs for warehousing and merchandising into that region’s stockfeed market.

Indicative new-crop values are sitting at around $500/t ex gin for its first available slot of April-May.

The delivered Downs spot cottonseed market is wide apart, being bid at $700/t and offered at $750/t delivered.

In northern NSW, Mr Brown said current-crop cottonseed was at $670-$680/t bid in the Namoi and Gwydir valleys, and one trader said $640/t ex gin Mungindi had traded recently.

As heat and wind continue to deplete paddock feed available to sheep and cattle, the current-crop cottonseed supply situation has tightened further with more graziers looking for a load or two to keep their stock going ahead of the next rain.