RAIN forecast for sorghum-growing areas in northern New South Wales and southern Queensland has taken a few dollars off values in the north, while in the south, sliding yield prospects for winter cereals in some areas have pushed bids and offers apart. 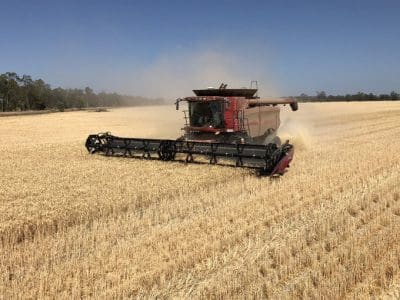 Some growers in southern Queensland have finished their wheat harvest already.

The South Australian Government last week cut 22 per cent from its production estimate because of the dry. Troubled areas stretch from the Upper Eyre Peninsula of South Australia through to the northern Mallee of Victoria, and into the central and south-west slopes of NSW.

It has prompted some growers in south-eastern Australia to cut cereal and canola crops with limited yield prospects for hay, and the size of the winter crop is dropping with every passing day.

Jerilderie Grain Storage and Handling co-principal David Barlow said plenty of crops between the Murray and Murrumbidgee rivers in southern NSW were being cut for hay.

“There will still be a bit of barley around…but there’s not a lot of forward selling,” Mr Barlow said.

Cereal hay in southern NSW is selling for around $240/t on farm, and most crops being cut are low in biomass following consecutive weeks without rain.

“There might be a bit of harvest pressure on hay prices when everyone starts cutting and selling it, but we might find it pushes back up again to around $250.

“It’s pretty hard to sell anything at the moment.”

Trade sources estimate end-users are covered into early November at least, and are waiting for harvest pressure from as far afield as Western Australia to quash the inverse between current and new-crop values.

At Wagga Wagga, Agfarm southern NSW account manager Matt Noonan said crops would benefit from rain in the next couple of weeks, but with the region’s barley harvest expected to start a week or two ahead of the norm in early November, time was running out.

“The wheat is still a bit fresher, and some areas will harvest on time, but others will be early due to the harsh finish.

“There’s no more moisture under some crops.”

“Everyone’s trying to guess when that new-crop will hit.”

Its impact on the market looks like being smaller than consumers were hoping, with much of the NSW grainbelt having received only 25 per cent of its average rainfall in recent months.

In the prompt market, ASW wheat and barley for prompt delivery to Griffith has been trading at $380/t, $10/t above the January wheat figure.

The continued absence of China as a sizeable customer for Australian feed barley is weighing on the new-crop price, as is the increased area planted, and the crop’s ability to handle a dry finish better than wheat and canola.

Mr Noonan said around 1-1.5 million tonnes (Mt) of barley harvested last year is estimated to have made its way into southern NSW from Victoria and South Australia to fill the region’s drought-induced shortfall.

“There will be additional barley on this (eastern) side of the country, which will play on dynamics.

“Barley should be well supplied on the east coast, but not where it’s needed.”

This means Downs feedlot demand for barley is likely to be filled by WA boat grain.

Trade in the north

In the delivered Downs market, wheat ex Central or southern Queensland farm, and also from the Brisbane free-on-truck market, is trading at $430/t for prompt delivery, $425/t for November-December, and sub $420/t for January.

New-crop barley is trading at a discount of more like $20/t to the prompt price.

“Harvest up here is probably two weeks earlier than normal, and the inverse is coming in,” Carpendale Commodities trading manager Andrew Jurgs said.

“There’s a lot of January pricing happening within the trade, and it’s pricing off other port zones.”

Many farmers on the Downs, and in CQ, are selling as much wheat and barley as they can ahead of new-crop WA grain arriving in the Brisbane free-on-truck (FOT) market from January on, which may come under some selling pressure on barley in particular.

“Feedlots are starting to get some reasonable cover.

“They’re buying from local farmers, and in new-crop, they have been more active than last year.”

In the sorghum market, prompt slots have dropped a few dollars per tonne in the past week, and parcels are now trading in the mid to high $390s/t delivered Downs.

The new-crop sorghum market is a nominal one only, but is also showing signs of softening based on forecasts for 10-20 millimetres of rain for the Darling and Western Downs and north-west NSW in coming days.

While well short of what is needed to get a sorghum crop planted, any falls would improve confidence in the summer-cropping outlook following the recent run of very hot and windy weather.

“The inverse has been maintained in the south,” Mr Hallman said.

“Prompt wheat and barley in the FOT Brisbane market hasn’t been active.

“People are waiting for harvest pressure.”

ASW wheat on-farm on the Liverpool Plains for November-December pick-up has been trading in limited amounts at $370/t, and a few dollars less for barley.

Offer prices current crop were nominally $10/t firmer in the north and unchanged in the south.

ASX wheat futures traded 3pc lower during the week, and barley was down 4pc, with hot and dry conditions a week ago triggering harvest and pressuring values.

It traded 1285 lots this week, the smallest volume in eight weeks. Open interest remains at a high; on Wednesday it was 13210 lots.