CONSOLIDATING production prospects for crops in much of southeastern Australia have reduced buying interest in current-crop barley, and prices have generally softened in the wake of the tumble in US futures markets on Monday. 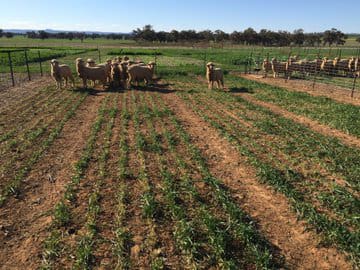 These sheep are grazing wheat as part of a GRDC-funded trial at Greenethorpe, but some commercial flocks are also grazing on cereals as conditions in many parts of NSW remain dry. Photo: Tony Swan, CSIRO

Following 15-50 millimetres of rain in the past week for crops in Victoria, south-east South Australia and parts of southern New South Wales, GeoCommodities principal Brad Knight said sellers of current-crop barley had to hunt for buyers now that new-crop was looking so good.

“Barley has started to get cheaper; it’s trying to buy demand in old-crop,” Mr Knight said.

Mr Knight said crops in the Wimmera and southern Mallee were in excellent condition and, provided temperature extremes and a lack of rainfall did not trouble them in coming weeks, above-average yields were in growers’ sights.

“We’ve had the rain come through that’s going even closer to securing the crop.”

Trade sources have said the inverse, or new-crop discount to current-crop, was sitting at a hefty $55/tonne for barley, and with a larger-than-normal area planted in Victoria this year, end-users were confident tonnage would be available by November.

“Barley’s the first crop to come in during harvest, so most end-users are shorter on barley than they are on wheat.”

Wheat’s inverse is roughly half that of barley’s, with the prompt delivered Melbourne market at around $350/t for ASW, compared with new-crop at $320-$325/t.

On barley, the prompt market is trading in limited volume at around $345/t delivered Geelong and Melbourne, while new-crop is changing hands at $290/t.

Growers have continued to advance forward sales on each rain event, mostly on multigrade contracts.

These are seen as a good option for crops which run the risk of producing out-of-spec protein or high screenings should the season turn nasty.

Also impacting the southern market was the tumble on US futures caused by largely bearish numbers out of the USDA’s August World Agricultural Supply and Demand Estimates released on Monday.

In southern NSW, Delta Agribusiness broker Brad McKinnon at Ardlethan said the district had received 10-15mm over the weekend , with crops to the south generally in good stead, while prospects were mixed for those north of town.

“People are looking at options for cutting crops for hay, and it really depends on whether we get any frost damage in the next month or so.

“Anyone with livestock that doesn’t have any hay left will cut their crops if they feel they can get enough bulk out of them.”

Mr McKinnon said some farmers were opening the gate to stock on crops.

“People are sacrificing a paddock rather than buying in feed.”

He said the prompt cash market has been trading spasmodically, with barley currently at around $355/t on-farm.

“Some days it’s quiet, and other days people are chasing loads.”

Trade sources have said current-crop liquidity had slowed to a trickle in the light of the pullback in Chicago prices which has weakened the outlook for new-crop prices.

In the NSW and Queensland markets, prices have been steady to lower, and growers on the outer south-west slopes of NSW and points north are considering their grazing, hay and grain options on any crops which look to have below-average yield potential.

Barley for prompt delivery has been trading in northern NSW at around $433/t, and wheat at $438/t, steady on recent values.

The last trade before that was in that same market.

“The feedlots are pretty strong, and we’re still selling grain and cottonseed to people feeding stock.”

Mr Dalton said the shortest input at present was roughage, but grain, pellets and imported protein sources were readily available.

“In theory, there should be plenty of hay and straw around, and there’ll be roughage from this year’s crop, but it’s tight at the moment.”

In the Brisbane market, barley free on truck (fot) has become dearer in response to less grain in the transhipment supply chain as stockholders cautioned against getting themselves stuck with a long position ahead of the new-crop harvest.

In the new-crop delivered Darling Downs market in southern Queensland, softer US futures have helped to weaken prices, with wheat quoted at $395-405/t for January, and barley at $370-375/t.

The Central Queensland wheat harvest will start next month, and the market is waiting to see how much, and for how long, the first of Australia’s new-crop influences grain prices.

Trucking wheat from CQ to southern Queensland consumers would cost something like $60/t, which would equate to a cash return of $330-340/t, which is an historically attractive price.

Sorghum in storage is held tightly and little has traded.

The small quantity dealt was in the range $350-355/t for August-September delivered Downs.

New-crop sorghum has attracted no activity in delivered markets.

It was quoted around $340/t in the Brisbane March/April track market.

The prevailing dry conditions had cottonseed quotes for August and September pick-up around $25/t firmer this week in the Gwydir Valley and up $10/t or so at Murrumbidgee Irrigation Area (MIA) cottonseed storage sites.

“Cottonseed values are tracking higher on the dry weather outlook and on the continuing feeding program across central and northern NSW.”

New-crop cottonseed markets had poor structure on account of lack of sellers.

The bid side of the market had lifted another $25-30/t to $525-530/t in the northern NSW valleys, but sellers have not been tempted to engage as no guaranteed river water is available for irrigation.

ASX wheat and barley futures prices traded around 5 per cent lower this week.

The eastern wheat (WM) January 2020 futures contract settlement price on Wednesday 14 August at $326/t, was $16/t weaker than a week earlier. Volume traded during the week was 1881 lots and open interest on Wednesday was 11406 lots, about 1000 lots higher than the previous week.