THE run of public holidays between Easter and Queensland’s Labour Day on Monday has been accompanied by enough rain to change the trajectory of Australia’s internal grain markets. 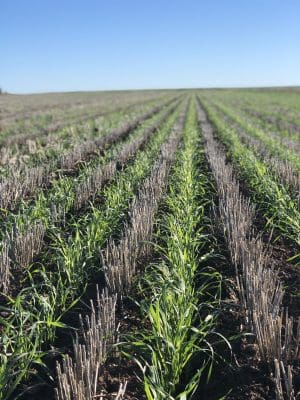 This crop of Borlaug 100 wheat was sown in mid April at Dulacca. Some Queensland wheat crops are well advanced and have growers and feedlots feeling more secure about new-crop prospects. Photo: Stephen Gibson

Over five weeks, the rain has triggered a turnaround in new-crop wheat prices which have dropped by more than 10 per cent.

Market Check head of strategy Nick Crundall said since widespread rain fell across South Australia and the eastern states recently, much of the market’s drought premium had been removed from new-crop wheat and barley prices.

“Considering how tight the Aussie balance sheets are, the local market was paying up relative to global markets for new-crop grain, as the forecasts remained bleak and the risk of another drought year was very elevated,” he said.

“However, this most recent rain will give a lot of growers a start, while also getting them to engage in some new-crop marketing, both of which have pressured prices.”

Mr Crundall said the delivered Darling Downs feed wheat and barley had both lost around $15-$20 per tonne since last Monday to trade at $336/t and $316/t respectively.

“Queensland markets remain under pressure as forecasts are showing another system coming in on the 10-day forecast which, if it eventuates, would help the fortunes of winter cereal croppers up there.”

Mr Crundall said it was worth noting that many areas, including parts of Western Australia, were still looking for a decent breaking rain, and other areas which have had some rain need follow-up soon.

“If weather remains dry over the next two to four weeks, that drought premium that’s been removed from new-crop markets will start creeping back in.”

In delivering GrainCorp Limited’s results for the half-year to 31 March, company CEO Mark Palmquist said the second half of February had seen a “dramatic change” in domestic preference from wheat to barley at eastern Australian ports.

This came about as the trade reacted to China’s launching of its anti-dumping investigation into historical pricing of Australian barley, and eroded barley’s premium over wheat which had been created by buoyant demand from China.

“With waves of uncertainty with the execution of barley into China, there was a clogging of the supply chain, with barley underneath wheat, and barley became part of the feed ration.”

Mr Palmquist said the major impact of this on GrainCorp was to the supply chain.

“What had impact was wheat coming in when we started the year, and the ration was primarily wheat, but by the time we got to within six weeks of the end of our half-year, it was primarily barley.

“The market has adjusted itself for barley being in the feed ration.”

Small-volume transactions were quoted for nearby delivery by the cattle feedlot sector, with nearby Darling Downs delivered wheat at $386/t, sorghum at $328/t and barley for May-June quoted at $387/t.

One feedlot operator said July was quoted at $5/t cheaper than May, and most consumers had booked cover to at least the end of July.

On the other hand, the inverse to new-crop wheat was around $50/t, and selling by the trade to consumers has been reported as slow.

“New-crop wheat values have dropped $20/t in the past two to three weeks, and while there’s some planting happening, there has not yet been enough of a break in the season.”

Mr Webb said new-crop wheat for January delivery to the Downs has dropped to $335/t from around $360/t late last month.

“With the crop still months away, these markets are definitely not engaging growers.”

Up-country grain shortages created by the poor 2018-19 season have maintained the focus on Brisbane value, and inland premiums which have reversed the usual pricing spreads.

The ASX wheat WM contract January 2020 traded each day this past week with a total of 2097 lots.

Supply was adequate as more gins increased production, but demand from graziers has been limited, as has fresh trade direct to feedlots.