DETERIORATING grain-production prospects in Victoria and parts of southern New South Wales have underpinned prices in the past week, while rain in the north has brightened but not consolidated prospects for new-crop sorghum. 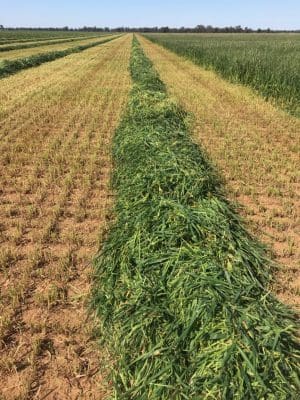 A cereal crop cut for hay near Bridgewater in Victoria. Photo: Hay Australia

And while harvest is well advanced in Central Queensland (CQ), and has kicked off in the past week in southern Queensland, Western Australia and South Australia, harvest pressure on prices is nowhere to be seen.

It had lifted by around $10/t from the previous week.

“The rain wasn’t widespread enough to get enough growers selling.  While growers near Dalby had good rain, the western Downs and southern Downs growers hadn’t had as much rain to give them confidence,” Mr Jones said.

“We are certainly in a much more positive place than we were, but not positive enough for the grower to sell a heap of sorghum.”

Sorghum prices at present are attractive to growers and, depending on seed availability, appear to make sorghum the crop of choice to plant this summer.

Aside from cotton, other summer-crop options such as corn, mungbeans and millets are in the mix.

“Growers aren’t really offering anything to the market, and a lot of what’s coming off in CQ and elsewhere is being sold locally, or across the fence,” Delta Ag Armidale-based broker, Tom Vanzella, said.

“There’s been a bit of rain around, and it’s starting to build a soil-moisture profile on the Liverpool Plains and northwest NSW, but growers are still nervous about the season.”

Growers who are intending to plant sorghum have been held back from forward selling because of the need for more rain to bolster yield prospects, and a lack of available planting seed.

“There aren’t a lot of forward sellers on sorghum because their production prospects still aren’t looking that great without more rain.”

“Sorghum is bid in Newcastle and Brisbane at $370-$380 per tonne, which is historically a very attractive price.”

Sorghum’s normal discount to wheat is $30-$40/t, but sorghum is bid currently at about $100/t below wheat, with the inflated wheat price reflecting transport costs associated with bringing it in from interstate.

Barley is trading at around $450/t for prompt delivery to Darling Downs end-users, based on pricing from grain shipped into Brisbane and trucked up-country.

“The wheat and barley markets are still ticking over at the highs, and most of the feedlots seem to be covered from now until Christmas, so there’s less volatility in the market than there has been.”

The past week has seen a turnaround in conditions, with Queensland and northern NSW getting handy rains, while many crops in southern NSW and Victoria suffer due to a lack of grain-filling rain.

Canola hay being cut in southern NSW has been making its way to northern NSW to continue to feed sheep and cattle.

“The difference with this drought is that producers aren’t destocking, and they are continuing to pay what they need to to keep feeding their stock because the cattle and lamb markets are still strong,” Mr Vanzella said.

In Victoria, crops in the Wimmera, central Victoria and parts of the Mallee are being cut for hay, as growers seek to capitalise on the peak of the biomass in crops.

Sources have said some growers are cutting their healthiest crops for hay, and leaving ones with lower yield prospects to run through to harvest, because strength in the hay market was worth targeting.

The Western District continues to have the brightest prospects of any cropping district in Victoria, and many of its wheat and malting barley crops are expected to yield around 4t per hectare.

Victoria’s annual barley usage sits at around 1.2 million tonnes, and trade sources have said it was looking increasingly unlikely to be able to satisfy that from the state’s crop which will start to be harvested in the next 10-14 days.

Trade sources have said South Australian prices were sitting above export parity, possibly boosted by the interest Victorian end-users are developing in the neighbour state’s crop.

Woodside Commodities, director, Hamish Steele-Park, said all cottonseed markets were cheaper this week than last.  Current crop markets was $10-15/t weaker over the week, and 2019 offer prices were about $10/t lower than last week.

Viterra received its first grain for the 2018 South Australian harvest this weekend, with loads of H2 wheat, field peas and barley being delivered to Port Pirie. 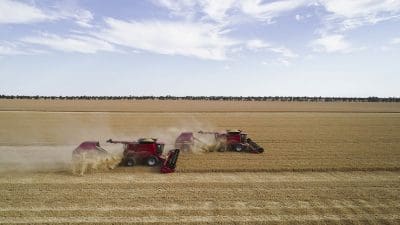 Harvesting one of WA’s first barley crops for 2018 in the Geraldton port zone.

“Growers delivering into the Viterra system can participate in a competitive market.

“Grain can be sold immediately with access to major buyers in the system.”

In WA, CBH Group received its first load for the harvest on Tuesday, with a load of canola delivered to its Geraldton Port Terminal.