WHEAT and barley prices have eased in the past week as confidence about the quality and quantity of crops in Victoria, South Australia and Western Australia builds. 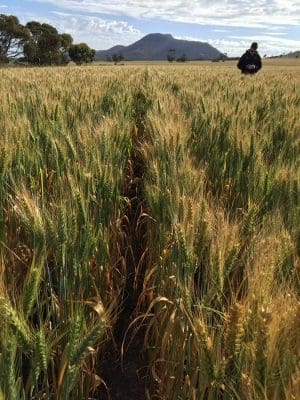 All three states have already cut considerable areas for hay, and harvest will produce a wide range of yields based on how much rain paddocks received before and during the cropping phase.

However, news of good quality and high yields, particularly in southern areas of South Australia and Victoria, have consumers feeling comfortable about supply options from eastern Australia.

In New South Wales, harvest of early crops in the state’s southern half has started, and harvest of what little crop there is in northern NSW is well advanced.

Griffith-based Grain Link trader Richard Gale said prices had softened in recent days, and the unimpressive yields of early crops were being countered by better prospects for later ones in Victoria.

“We’ve seen prices drop significantly in the past week or 10 days.

“There’s a bit of barley coming off around Goolgowi, and within the next week, there’ll be quite a few going on harvest.”

Mr Gale said the barley bids were looking too low to attract grower selling, especially in the face of a falling hay market which had reacted to supply-side pressure.

On the Darling and Western Downs of southern Queensland, some growers have had up to 60 millimetres of rain in the past month, but few have had enough rain to plant sorghum with confidence.

The crop can be planted up to mid-January, but if good rain does not fall by then, growers will probably switch their planting ideas to next year’s winter crop.

Most areas are still at least 50-75mm away from having sufficient soil moisture to plant a crop.

“There needs to be a lot of rain to get a crop in in NSW.

“The sorghum market is operating, but it’s reflective of that situation.”

Mr Broun said barley values had sagged under anticipation of the grain that would be coming by road, rail and sea from South and Western Australia and Victoria, and a little local harvest pressure.

“There’s been a bit more barley harvested in northern NSW than the market was expecting.”

In the Mallee region of eastern South Australia and north-west Victoria, small amounts of barley are changing hands at $265-$270/t ex-farm November-December, which can price into consumers in northern NSW.

“We’re still a long way over the world price.

“The east coast of Australia is still going to be a premium market for WA barley, rather than China or the Middle East.”

Supporting on-farm values for Queensland and northern NSW barley and wheat is its high protein, up to 15 per cent in some cases, which makes it a premium product for local consumption.

“Some graziers are willing to pay for that high protein.”

Feedlots on the slopes and plains are also buying what local grain they can, and trade sources do not expect prices to sink much more.

“Grain has probably had a big enough fall now for wheat and particularly barley.

While wheat and barley crops in southern Queensland and northern NSW are lucky to make 2t/hectare, many crops in the Wimmera and southern Mallee of Victoria are looking at 6t/ha yields or better.

However, they are still at risk of frost damage in the next week.

In its most recent Australian market report released on Monday, AWB said barley delivered Melbourne had dropped $20/t over last week, and was trading at $290/t.

“Undoubtedly, there will be flow-on effects of the barley market on to the wheat market.

“There doesn’t appear to be a lot of buying activity at the moment, and this is likely to continue until the harvest in the southern states is more advanced and there is a better understanding of the size of the national crop.

“Growers may also be hoping prices will rise to the heady highs of last year and may well wait to sell – even though current prices are still strong.”

Small volumes of current crop were transacting this week, but only to the grazier market according to Woodside Commodities manager Hamish Steele-Park.

New crop markets were displaying little depth in both bid and offer and reflected a wide variance in perceptions of cottonseed value next year.  Delivered Darling Downs buyers’ value was about $660/t and sellers’ ideas around $680/t, neither willing to commit large parcels.

ASX wheat and barley futures traded 2 per cent lower during the week.

The eastern wheat (WM) January 2020 contract traded 901 lots this week, settling on Wednesday at the week low $344/t.  The March contract traded twice during the week for a total of 200 lots at a premium of $2/t over January.

Barley and wheat ASX January contracts traded at differentials between $66/t and $71/t this week.