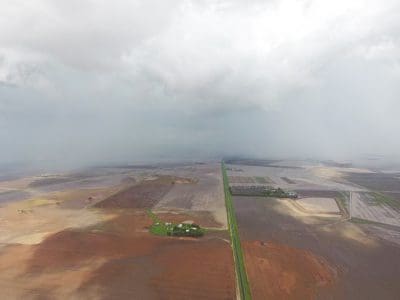 Most farms on the Darling Downs have had at least 200mm of rain in recent weeks. Photo: Peter Waddell, Formartin

WIDESPREAD rain across northern New South Wales and southern Queensland has softened values for barley, sorghum and wheat as demand from custom feeders and graziers evaporates.

Countering this has been localised flooding, which has cut roads in parts of the outer slopes and plains including the Darling and Western Downs, and affected the flow of grain to some end users.

At Goldstar Commodities in Goondiwindi, broker Geoff Webb said wheat values had eased by a few dollars per tonne, and barley had dropped by up to $20/t.

“From now on, our prices will be a function of interstate pricing.”

Trade sources say the rain has pushed grain values back to export parity.

On the Darling Downs, most growers have had enough rain in recent weeks to replenish subsoil moisture reserves.

Many will now be able to plant wheat, barley and chickpeas in autumn, and fallowed area to sorghum or cotton in spring.

However, storms and showers have been patchy, and some farms in Queensland and northern NSW need further falls before they can expect to plant their 2020 crops.

“Winter crop is becoming an option for people.

“We’re now in a position that if we get planting rain, we’ll be right to go.”

Delivered Downs sorghum is quoted at $415/t for June-July based on the Central Queensland crop now being planted, steady on last week.

In southern Queensland, flooding has washed out some of the small amount of crop planted in recent weeks, and well beyond the normal seeding window.

“The ball’s been in the grower’s court, and now the end users will push back on high offers.

“Most traders are trying to work out where everyone else is willing to buy.”

“We have seen a bit more feedgrain pop up out of the system in the past few weeks,” Mr Stowers said.

The market for SA and Victorian hay, which has been supplying the drought market in NSW and Queensland, has gone quiet in response to regenerating pastures now sustaining sheep and cattle for the first time in more than a year or two.

Trading houses are continuing to load trains in South Australia with barley and wheat to supply feedlots in northern NSW and along the Queensland border.

Along with SA’s own feedgrain demand and a busy export shipping stems, this is supporting its prompt delivered-consumer prices at around $310/t for barley and $360/t for wheat.