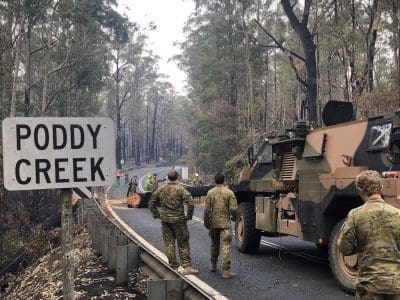 Australian Army personnel and others work to clear the Princes Highway in eastern Victoria last week after a bushfire. Photo: Darren Chester MP

A CONTINUED lack of grower selling has driven up wheat and barley prices by up to $20 per tonne in the past month as traders scramble to cover short positions amid difficult supply conditions.

They include road closures caused by bushfires which have ravaged parts of southern Australia, and a shortage of freight as road-transport operators concentrate on getting water, grain and hay to drought and fire-affected communities.

Mr Dalton said trucks bringing wheat and barley from Victoria and trains coming from South Australia were supplying much of the wider region’s needs.

“Growers cashed in at harvest time, and very few growers have grain to sell,” he said.

“The ones that do are holding on to it.”

Patchy rain of up to 100 millimetres has fallen on the NSW slopes and tablelands in recent weeks, and has helped to fill dams and generate pasture growth in some areas.

Showers and storms are forecast for eastern Australia in coming days, and widespread rain would ease the call for hay and grain being used to supplement paddock feed for sheep and cattle.

“With the drought and the fires, there’s a lot of additional demand for hay and some for grain too.”

Mr Dalton said consumers had had to factor in interruptions to the supply chain caused by fires closing numerous roads and highways.

“You need to take some contingencies.”

Dairying, beef cattle and sheep areas on and near the eastern Victorian and NSW border, on the south coast of NSW and on South Australia’s Kangaroo Island have been hit hardest by the fires over the extended Christmas and New Year period.

In Victoria, Wilken Group trading manager Andrew Kelso said some shorts in the January market had lifted grain prices as growers across the state continued to hang on to their grain in the hope of a further rise in values.

“The prices have been pretty strong, and the grower doesn’t want to sell.”

In the delivered-Melbourne market, the inverse is still alive, with barley trading this week in the $340s, and $330-$340/t for February.

Barley is priced at about $30/t below wheat in the Melbourne market, and feed wheat from western Victoria is trading in reasonable volume.

“The spread’s tightened up since the start of harvest.

“The market won’t move until it sees what’s in rain gauges.”

With China still out of the market for Australian feed barley as its historic pricing investigation continues, many had expected its price to drift lower on supply-side pressure.

GeoCommodities broker Brad Knight said this had not been the case.

“Everyone has come from the short side on barley, whereas wheat is more actively traded forward.”

A smaller-than-expected Western Australia crop and heady demand in the Brisbane free-on-truck (FOT) market are supporting prices for WA barley.

“There’s not much happening in export because we’re too expensive, but we’ve got feed demand from the east coast.

“Barley still works from WA on to the Darling Downs.”

With APW wheat at around $370/t free in store, and barley at $310/t, Mr Gliddon said prices were well above most people’s expectations for the close of harvest.

The sorghum market has hit a high of recent times of around $510/t delivered Brisbane on short covering, roughly $100/t above what a consumer would pay.

“Those shorts would have been put in place six or eight months ago,” one trader said.

“We’ve seen a few offers from growers to meet that, but there’s no new business being written with consumers at those prices.”

An inverse in the Brisbane FOT wheat market still exists, with January quoted at $450/t, $5/t above the February figure.

The Brisbane barley FOT market appears to have settled into a normal trading pattern now that ample supplies have arrived by ship from SA and WA, with January and February both at around $395/t and March a few dollars cheaper.