PRICES for prompt sorghum have risen by up to $25 per tonne in the past week, while wheat in northern markets is up $5-$10/t, and barley values everywhere are holding ground as buyers continue their anxious wait for Victorian grain to pressure the market. 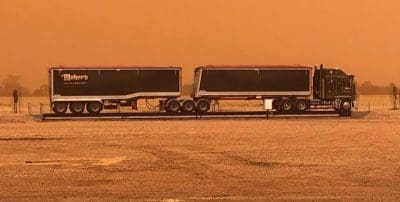 Ahead of the first new-crop vessels arriving in Brisbane and Newcastle with South and Western Australian wheat and barley late next month, consumers are paying more than they were hoping to for barley ex farm in southern New South Wales and north-west Victoria.

On the Darling Downs of southern Queensland, wheat has traded for November-December delivery at $425-$430/t and is being sourced from growers in Central Queensland (CQ), some Downs farms, and the Brisbane free-on-truck (FOT) market.

“We thought it might have resolved with wheat from elsewhere, but there’s a big vacuum in northern NSW, and what’s been grown on the Downs has been sucked up.”

“Wheat values have been fairly static and well bid since September, and the SA and WA crops are not going to be bin-busters.”

Spot demand from poultry and feed millers in the Brisbane port zone has helped to lift wheat values, and driven sorghum prices higher.

Some consumers near the coast have also booked additional coverage as bushfires affect vehicle movements in south-east Queensland and northern NSW.

“You can get $410-$415/t for sorghum in the Brisbane track market coming off one of the smallest sorghum harvests ever.”

These prices have been dragging the small amount of unsold CQ sorghum into Brisbane, and away from consumers from the Burnett region to North Queensland.

Sorghum to Downs consumers is selling at more than $400/t, which reflects sorghum’s discount to wheat being around half the benchmark $60/t.

“There’s not a lot of sorghum left, and the best chance for next year’s sorghum might be from CQ if they get rain to plant in January.”

Feedlots and stockfeed millers in northern and central NSW are buying barley in the spot market at values of around $300/t on-farm in southern NSW and $260-$280/t in the northern Mallee.

Stewart Grains trader Robert Quinn said the Brisbane FOT market was likely to keep supplying the Downs and northern NSW as far south as Glen Innes, while Victorian grain would price as far north and east as Armidale and the Liverpool Plains.

“The trains from South Australia to NSW will start, but not for a while.”

He said the lack of a widespread early sorghum plant in northern NSW was helping to support prices.

“There’s not going to be much early crop in NSW.

“The early window’s closed, but there could be a big late plant if it rains.”

The brightest yield prospects for wheat and barley in Australia’s 2019/20 harvest are in Victoria and southern SA, where volume barley deliveries are expected next week, and the wheat harvest is around two weeks away.

“A lot of canola and lentils have come off, but harvest has only begun in the past three days for barley.”

Attractive site prices for both, plus sales of cereal hay, are earning growers some early harvest cash.

Early indications point to barley from the northern Mallee being warehoused, but Mr Tonkin said supply-side pressure was expected as crops with high yields and testweights of up to 70 kilograms per hectolitre hit the market.

Mr Tonkin said growers in the central and southern Mallee who had very poor yields last year due to drought were likely to be keen sellers in the prompt market.

“I expect to see a tsunami of barley hitting the market soon.

“Areas that got a yield of less than 0.5t per hectare last year look like getting 3.5-5.5t/ha this year, and they will sell some of that grain on the back of their cashflow requirements.”

Its transhipments via port have brought a further 38,180t into its system.

GrainCorp said harvest in CQ and southern Queensland was nearing completion, and good-quality wheat receivals were coming into the Wyalong and Griffith regions of southern NSW.

The company said harvest activity was ramping up in Victoria, with barley being delivered in the northern Wimmera, and wheat and canola starting to trickle in.

GrainCorp harvest casuals and staff are moving from NSW and Queensland to help staff Victorian sites.