SORGHUM values have fluctuated this week in response to some solid planting progress on the Darling Downs, a heatwave, and a return to mild weather as prospects for the crop to be harvested in 2019 remain mixed. 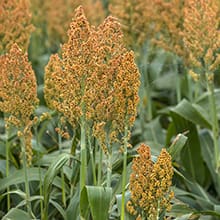 “We saw a lot of volatility tied to concerns around production, with prices jumping $30 a tonne in a heartbeat,” Robinson Grains Toowoomba-based trader, Anthony Furse, said.

“The market is so sensitive at the moment, and planting prospects for a lot of the sorghum in New South Wales are hanging on the next rain that comes through.”

“Some crops on the Western Downs and out to Roma and Surat got towelled up in the heat, but some areas had 10 millimetres of rain overnight to help things.”

Mr Furse said many growers on the Inner Downs were waiting for an extra 25mm of rain following maximum temperatures of up to 40 degrees Celsius over four or five days.

“That’s really sucked the moisture out of the topsoil, and 25mm of rain is needed before some of those Downs growers start planting again.

“What the market’s showing us is that we can’t afford to have too many hiccups.”

Trade estimates have said the Australian sorghum crop now being planted could hit 3 million tonnes (Mt), but NSW’s key sorghum area, the Liverpool Plains, as well as Central Queensland (CQ) would need to have an ideal start.

Concerns about limited availability of seed for the late-planting CQ, and a patchy start on the Liverpool Plains are making 2.4Mt look more likely at this early stage.

Nearby premium for wheat

The wheat and barley harvest has rolled south this week, and some growers on the Western Downs and Maranoa now have all their winter crops off.

Quality of wheat harvest has been described as good, with limited screenings due to the crop producing limited biomass during the abnormally dry growing season. 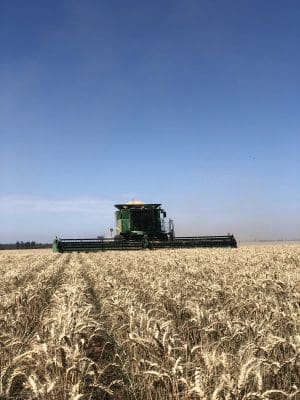 On the Darling Downs, wheat has been trading at $450/t for prompt delivery, whereas January wheat is closer to $442/t.

“There’s a nearby premium for here and now, and we’re not feeling any harvest pressure.”

The plains of central and northern NSW remain the epicentre of high prices, and are trading at around $10/t more than the Darling Downs or southern NSW markets.

This is because of their considerable distance from the ports of Newcastle and Brisbane as the launching point for grain coming from Western Australia, from South Australia by rail, or Victoria by road.

Feedlots are believed to be covered for grain until January, and some have been looking to extend coverage to March, with the trade now busy covering its positions to end-users for delivery in coming weeks.

Barley is trading in the inland market at a discount of around $10/t to wheat.

At Narrabri, AgVantage broker and principal, Steve Dalton, said the small amount of winter crop planted from Narrabri to Goondiwindi and out to Mungindi was now being harvested, and some sorghum had been planted close to the Queensland border.

“South of Moree, there’s very little summer crop in, and they’re quickly running out of time to plant in this window.

“The Liverpool Plains is starting to build a profile, and growers might have one crop that’s been planted and looks okay, and another one that’s patchy.

“What’s in is going to need regular rain.”

Mr Dalton said Narrabri’s weather on Tuesday at 42 degrees, “blowing a gale”, and with the sun obscured by dust had been detrimental to young crops and soil moisture.

Considerable numbers of sheep and cattle are still being fed in paddocks on the plains and outer slopes of NSW, and while recent rain has generated some pasture growth, Mr Dalton said demand from graziers could resurface.

“There’s still a lot of handfeeding of stock  in districts like Burren Junction, Cryon and Walgett, and it’s got to keep raining or that stockfeed market will see higher prices.”

Mr Dalton said values for straw and byproducts were holding up as supplies of cottonseed ran down.

“People are selling barley straw for $250/t on farm, and $20 for wheat straw, and canola and wheaten hay from South Australia is coming in at $450/t.”

Current values for Prime Hard wheat delivered Narrabri have been quoted at $470/t, and $455/t for H2, with container packers taking much of the volume.

At Wagga Wagga, Agfarm account manager, Matt Noonan, said the market was relatively quiet ahead of harvest which is ready to start in earnest in southern NSW next week following 10-20mm in most areas in recent days.

“We’re not seeing harvest pressure yet.

“The barley harvest has started, and the wheat will start next week before things really got going in the second half of November.”

“We do expect a bit of pressure on prices, but that mightn’t happen until we see the Victorian harvest get going.”

“There are some small shorts in the market out there at the moment with a gap from now until when new-crop really starts to come off.

“Growers with old-crop are not selling their grain because they’re busy with other things like harvesting their barley and canola.”