VALUES for old and new-crop grain in southern New South Wales and Victoria have eased in the past week in response to mostly light rain in cropping areas as far north as Central Queensland. 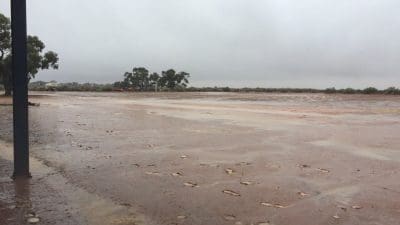 Rain in NSW has helped to ease feedgrain demand from those feeding sheep and cattle. Photo: Emma Turner, Mossgiel

The rain, however, has failed to depress values by any more than a few dollar in Queensland and northern NSW.

One trader said the greatest benefit of the rain would be to generate feed other than struggling cereal crops for hungry kangaroos.

“Any crops that are up and away have been getting smashed by kangaroos, and this rain will take some of that pressure off.”

The heaviest falls — up to 25 millimetres in places — has fallen on the plains and outer slopes of NSW, where it will help crops already in the ground, and encourage some late planting.

Its major benefit is likely to be a sparking of growth in pastures,which will diminish nearby demand for cottonseed, cereals, hay and faba beans for paddock-feeding to sheep and cattle.

One Victorian trader said growers with wheat or barley stored on-farm were looking for $300 per tonne, and were unlikely to get it.

“New-crop pricing has come back about $10/t right across Victoria, and we’re seeing more old-crop grain offered since NSW got that rain.”

“We’re seeing lots of offers and not many bids, and this is the first sign of softness in the old-crop market for months.”

Grain values delivered to southern ports were still said to be about $50/t over export parity, and in the up-country market, offers for wheat and barley were sitting at around $15/t over bids.

Trade sources said large feedlots like Rangers Valley and Whyalla, as well as family and smaller corporate operations in southern Queensland and northern NSW were now completing coverage of their feed requirements out to October.

“Anything east of Moree is going to have to keep buying grain for a while yet.”

Traders said the new financial year was likely to boost grower offerings from next week on, and these would supplement grain coming into Brisbane by ship from southern Australia, and to Moree by rail from the south.

“That Brisbane grain is going to dairy farms and the poultry and feedmills not far from the port, and grain from down south is still making its way by road on to the Darling Downs.”

New-crop wheat delivered Downs had been sitting at $385/t at the beginning of this week when substantial rainfall was looking likely, and prices fell $15.

They have since recovered $10/t to around $380 January plus carry.

Traders generally see the old-crop Downs market as easing towards $400/t for wheat and barley in the weeks leading up to the winter-crop harvest.