CONCERNS about diminishing yield prospects for crops in south-central New South Wales and north-west Victoria, coupled with The Philippines’ volume buy of Western Australian wheat, have lifted prices for new-crop grain this week. 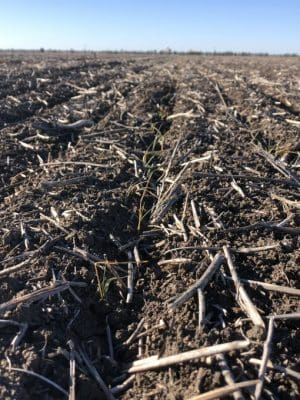 This crop in the Moree district is like many in northern NSW this year and needs rain by mid-August to survive. Photo: Tony Lockrey

This is up $5-$10/t on values quoted last week, and the rise has flowed through to new-crop sorghum for March delivery onwards on the Downs, which has traded today at $322/t, up from $315/t quotes last week.

Traders said nearby current-crop prices earlier in the week had drifted in the Brisbane free on truck (fot) market on the basis that most end-users had taken adequate cover for the time being.

While barley has remained at a premium to wheat, both were quoted either side of $385/t fot Brisbane.

Stewarts Grain Inverell-based trader Robert Quinn said the up-country market was focusing on hay and cottonseed as paddock feed for sheep and cattle in the continuing dry conditions, and local wheat and barley.

He said new-crop sales of grain were limited as farmers were uncertain about production prospects, and yields were looking to be so low they were concerned about holding enough for seed for their 2020 planting.

“We have seen zero grower selling on new-crop, and the prompt market for wheat is around $410/t ex-farm Moree and $420/t for barley.

“That Brisbane fot grain is cheaper, and that’s what most consumers are buying, but for those not putting in additives into what they’re feeding, local grain is more attractive.

“Local barley has a protein content of 13-14 per cent, whereas the WA barley coming off the boat might be more like 9pc, so the local grain is better if grain’s what you’re feeding. 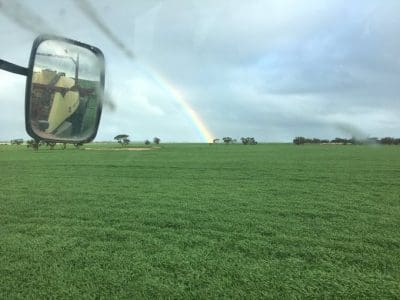 The crop of Planet barley growing in the Birchip district of Victoria has above-average yield potential. Photo: Chris Rickard

“In the new-crop market, the consumer is active, and it’s all being priced out of WA. New-crop is up because the market is fearful of dry weather in southern NSW.”

Trade sources said they believed major feedlots were covered to October or November.

Temora trader Bill Preston said crops Temora on the outer southwest slopes and plains were in need of a drink to preserve yield potential.

“We definitely need some good rain because getting 5-6 millimetres here and there like we’ve been getting won’t carry the crop through August if it’s dry and windy. We’re on a seesaw at the moment,” he said.

Mr Preston said current-crop grain prices appeared to have weakened marginally in the past week, but volume traded had been minimal.

“A lot of farmers wait till after June to sell, and we’ve seen some of that.

“Also, demand has gone off because stock numbers are down, and because a lot of sheep are on crops all up into the hill country.

“Maybe when they comes out of those paddocks, we might see the demand for grain pick up.

“We’re a couple of weeks short of where the market peaked last year, and it was $100/t above where it is now.”

Lack of fibre availability has become a driver of decisions, and traders said the supply of palm-kernel meal, a major imported source of fibre to cattle feeders, was tight through August and September.

Traders also said the chronic shortage of fibre for animal feeders was looming in growers’ minds, and any cereal crops with lacklustre yield potential profitably could be cut for hay, even in Central Queensland.

Cottonseed offer prices were reported $10/t firmer than last week, based on lack of offers and on demand associated with the continuation of dry weather.

The southern Queensland and northern NSW gin sites would be expected to complete ginning this year by mid-August.

A shortage of water for irrigation means NSW operators continue to face the looming threat of a 2019 cotton crop of barely 1 million bales, and this is likely to prompt sellers to lift their offers.

Wheat and barley Australian new crop futures logged significant gains.  ASX eastern wheat (WM) January 2020 futures traded $8/t firmer over the week.  The contract settled on Wednesday 24 July at the week high $331/t.  Volume traded during the week was 545 lots and open interest on Wednesday, at 10047 lots, was below the week’s high of 10362 lots on Friday 19 July.