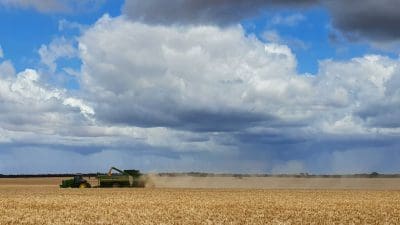 GROWERS who can only see upside in the market are warehousing a greater proportion of grain than normal, bids rising by $5-$10 per tonne in the past week as traders and consumers attempt to secure barley and wheat tonnage.

The sorghum market has risen by more than $20/t in the past week.

Based on nominal quotes in thin trade for the sorghum market, prices for the summer grain have risen $40-$45/t since 1 November, but eased a few dollars since rain appeared on this week’s forecast for western Queensland.

Users like the Dalby Bio-Refinery and poultry mills are believed to be looking at alternatives to sorghum, which could still be planted over a large area if more than 100 millimetres of rain falls between now and the end of January in northern New South Wales and southern Queensland.

As Western and South Australian farmers finish their barley harvesting and move into wheat, the Australian barley harvest looks like it has passed the halfway mark, while the national wheat harvest may only be around 20 per cent complete.

Early indications are for wheat and barley are high protein and good quality in all regions bar the south-west slopes of NSW, where high screenings plagued barley crops.

The upshot is the eastern Australian consumer cannot expect to have a mountain of low-protein WA new-crop wheat and barley come their way this year.

In southern NSW and the Victorian Mallee, the wheat harvest is well advanced, and with most deliveries registering at least 11.5 per cent protein, flour millers are bidding up to secure 2019/20 supplies.

Temora grain trader Bill Preston said harvest on the outer south-west slopes of NSW was all but over, and his business had received about 40pc of the grain it hoped to this harvest.

The problem is a common one for traders, who are having trouble getting volume because struggling cereal crops have been cut for hay, and those which have been harvested are selling direct to consumers or are being stored on-farm or warehoused.

“Barley has firmed up for sure,” Mr Preston said.

“Everyone was talking about how barley in NSW was too dear, and how they were going to bring it up from Victoria, but what’s being offered out of there isn’t any cheaper.”

Barley on-farm is hard to find at less than $300/t, and the lowest-protein wheat available in NSW is not going anywhere for less than $330/t.

For wheat, that equates to around $350/t delivered Riverina end-user in southern NSW.

Mr Preston said demand from graziers was noticeably smaller than this time last year as cattle numbers in particularly are reduced on the tablelands ahead of what looks like being a long, hot and dry summer.

“The stock numbers just aren’t there.”

Graziers and mixed farmers with sheep are still buying barley. It has traded this week delivered to the Dubbo district at a low of around $360/t.

“It’s all freight related at the moment.”

Australia’s biggest-yielding crops this harvest will come from Victoria’s Wimmera and south-west, and south-eastern South Australia, and notwithstanding today’s harvest ban due to fire risk, harvest in the Murray-Mallee region of South Australia and north-west Victoria is going at full pace.

Shannon Bros managing director Brian Shannon said the company’s Beulah site in the Mallee was receiving barley, canola and lentils, and its Horsham site had received its first barley deliveries this week.

“We’re seeing about 25pc of grain being sold in the cash market and 75pc being warehoused,” Mr Shannon said.

“That’s a lot more warehousing than we normally see, and it tell you that the grower thinks the price is only going to go one way, and that’s up.”

ASX wheat and barley markets traded by more than 1pc and 2pc respectively lower during the week.
The ASX feed barley (UB) January 2020 contract traded from a high of $273/t at the beginning of the week and settled yesterday at a low for the week of $266/t.
Trade volume was 404 lots in the January contract. Open interest rose from 2462 a weeks ago to 2662 lots on Wednesday.
The eastern wheat (WM) January 2020 contract traded 500 lots over the week, beginning at the high of $343/t and ending yesterday at $338/t, above the week low which occurred on Tuesday at $337/t.  Open interest rose to 13539 lots on Wednesday.
Significant outside-of-regular-market-screen activity occurred on Wednesday, a block trade of 250 lots and various smaller trades after the Australian market closing time which will appear in the subsequent day report.