DEMAND from the feedlot sector for feed grain is expected to remain strong as the number of cattle on feed in Australia reaches record levels, driven largely by low prices for grain. In the March quarter this year, the national figure for cattle on feed hit just over one million head, the highest ever.

Australian Lot Feeders Association president, Tess Herbert, said she expected that number to continue to increase and demand for domestic feed grain to rise, with lotfeedeers taking advantage of low grain prices and the capacity to keep cattle on feed for longer.

“Anecdotally, most feedlots are keeping cattle on feed longer, beyond 100 days and typically to 110-120 days. It’s all about grain pricing and the ‘cost-of-gain’ over what the feeder cattle are worth to buy. If we can keep them on feed for even longer and still meet abattoir specs that is what we will do because the grain pricing allows that to happen,” she said. 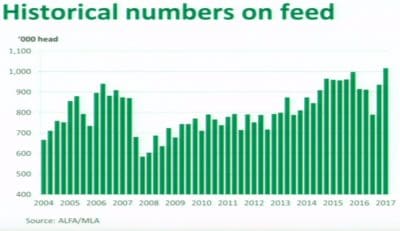 Speaking at the Australian Grains Industry Conference (AGIC) in Melbourne, Ms Herbert said the business model for the feedlot industry had changed in recent years, with grain prices becoming the dominant driver.

“You would expect that at a time of high cattle prices you would have lower numbers of cattle on feed. But that didn’t happen,” she said.

“Why is the grain price a more significant driver than the cattle price? It seems counter intuitive. Everyone thinks feedlots will empty out when the cattle price gets high. That didn’t happen.

“One of the reasons is that the model is changing in the cattle industry. Country previously used for, say, a grass-fed bullock, particularly in the north, is now being used to produce a 100-day feeder steer. So, there is a change in the market.

“Feed grain demand and cattle on feed will remain high, even if cattle prices remain high.”

Ms Herbert said while cattle prices had come back recently, there was a new trading band for cattle prices that had developed over the past four or five years that had changed the dynamics.

“We will not see the low prices we have seen before. There has been a shift. They won’t go back to the lows, they will remain high, but not as high as they were late last year,” she said.

“Over the same time, though, feed grain prices haven’t moved in the same way. 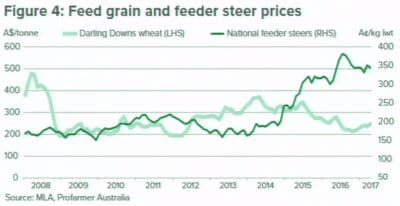 Ms Herbert said the beef industry was the largest domestic end-use for Australian grains and the feedlot industry depended on the grains sector, particularly for supplies of barley, wheat and sorghum.

She said the grains sector needed to be aware of the specific feed needs of the feedlot sector, particularly when it came to quality issues.

“We have grain quality parameters. We are not a dumping ground. If it is not accepted somewhere else, don’t send it up the road to the feedlot because they won’t take it if it doesn’t meet their specs,” she said.

“Specs are individual for each company. You need to determine what they need. They will be around weight and screenings. Some feedlots might have protein requirements, but that is not as important. They can access protein through other parts of the diet like cottonseed.

“We have requirements around food safety. We do request commodity vendor declarations. We sample all the commodities that come onto feeds for chemical residues.” 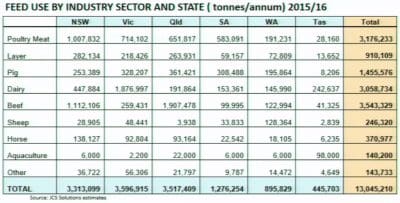