THE Coastal Trading (Revitalising Australian Shipping) Amendment Bill 2017 currently before the Australian Parliament is unlikely to bring about any reduction in the cost of shipping grain between Australian ports. 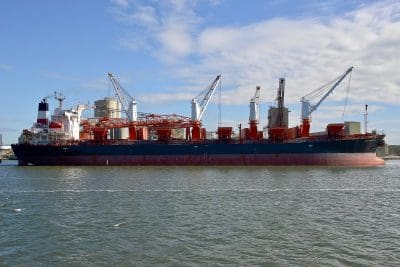 The bill is, however, expected to reduce red tape currently encountered by shipping companies carrying bulk and containerised goods, including grain, to domestic Australian markets.

The bill was introduced to the House of Representatives last week by Federal Infrastructure Minister, Darren Chester, and will need approval from the Senate before it can be enacted.

Mr Chester said the amendments would reduce red tape that has been identified by stakeholders as adding costs to doing business in Australia.

“Users of coastal shipping services, particularly in the manufacturing, petroleum and primary industry sector, have been calling for the regulatory burden to be reduced to increase flexibility and reduce shipping costs,” Mr Chester said.

“Examples of this include an Australian company, which received a last-minute request from a customer for 2,000 tonnes of cargo to meet a customer shortage.

“Despite already holding a temporary licence to carry 8,000 tonnes of cargo, the ship had to wait an extra day in port for a variation to come through, at a cost of US$15,000 in port costs.”

The bill seeks to reduce red tape through by removing the five-voyage minimum currently required for temporary licences, and amending voyage notification requirements and tolerance limits on cargo volume and loading date variations.

If passed, the bill is expected to benefit the resources sector directly by amending the definition of coastal trading to include voyages to and from offshore installations.

However, it fell short of addressing the issue of wages paid under the Fair Work Act, Seagoing Industry Award Part B, for crew on vessels not flying under an Australian flag .

“By not abolishing Part B wages, the government has missed an opportunity to fix a genuine problem in the efficient functioning of the coastal trading regime,” Ms Lloyd said.

“For some operators, this is the major impediment that adds time, cost and complexity to their participation in coastal trades, and results in cargo being left behind.”

“These are sensible changes.”

Ms Lloyd said there was nothing in the bill to help Australian shipowners compete with foreign ships that had “all but unfettered access to coastal trades”.

“We held low expectations on that front and unfortunately haven’t been disappointed there.

“These shipments will all happen on foreign ships because there are no Australian ships available.

“If the foreign vessel does three or more voyages in Australian waters, they are not paid Australian Part B seamen’s wages; that is not going to be changed by what Darren Chester is proposing.”

The Australian merchant fleet has contracted markedly in recent years, and Ms Lloyd said 10 vessels have been lost in the past five years alone.

“It’s really about how the shipping companies are treated.”

Maritime Union of Australia (MUA) national secretary, Paddy Crumlin, said the proposed changes would make it more difficult for Australian ships with Australian crew to compete in the coastal trade.

“Instead of enhancing a vital national industry with a long and proud tradition, the Turnbull Government wants to send the jobs offshore,” Mr Crumlin said.

“Without strong rules, Australian companies have to compete with cheap, exploited foreign labour on Flag of Convenience vessels, the owners of which pay no tax and often flout safety laws.

“Sensible senators will see right through the Government’s charade and reject this Bill in its entirety.”

Mr Crumlin said the bill lacked consultation and ignored proposals put forward in the industry Green Paper which was developed through exhaustive meetings with key stakeholder.

“The bill does not address proposals aimed at growing Australian content in coastal shipping such as the Strategic Fleet concept.”

He said the concept provided an opportunity to achieve better coordination between Navy objectives and merchant shippin.

Industry sources have said it was often cheaper to export grain to China than between Australian ports, with Part B wages to blame.

The high cost of sea freight has been an impediment to pricing grain transported by sea from southern Australian terminals to Brisbane.

The Port of Brisbane can supply grain to the city’s metropolitan market, and adjacent up-country end-users like feedlots and poultry farms which have been drawing grain from as far afield as South Australia as Victoria to counter the dry-induced feedgrain deficit.