A MUCH-ANTICIPATED rainfall event has halted a slide in yield prospects for some winter crops in northern New South Wales and Queensland, and clipped the premium from the drought feed market as traders shore up positions. 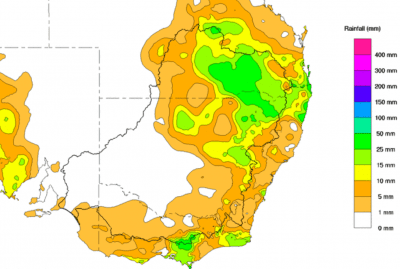 “Barley new-crop value moved a little more, as its spread off wheat had narrowed in recent times closer to $5/t from the $10-15/t it normally would trade off wheat delivered Darling Downs.”

The delivered Darling Downs market, always an active trade destination for current and new-crop grain business, had built big premiums not only for current grain supply but also forward coverage into 2019.

“We saw some of the drought premium disappear out of the market from lofty levels; it was always going to happen.

“What we’ve seen is people exiting positions and profit-taking.  The consumptive buying which was evident the week before was inactive last week.”

US wheat futures had fallen significantly in August which also fuelled a weakening in Australian values, however the effect was tempered by a drop in the value of the Australian dollar.

New crop prices may well start to climb if follow-up rain does not fall in the next two weeks.

Regions close to the border generally got the best of the rain that fell between Friday and Sunday.

In Queensland, highest registrations included Meandarra with 51mm, Texas with 27mm, St George with 40mm, and Wandoan with 18mm.

Lillyvale feedlot manager, Laird Morgan, said parts of the Condamine district have had 30mm of rain.

“This rain will be the difference between putting the header into the crop we planted dry in July and not,” Mr Morgan said.

“They won’t be big crops, but there will be some crops, and some sorghum will go in on this rain for sure.”

Mr Morgan said crop conditions were patchy, but “half-reasonable” in most cases, despite being planted late and having little in-crop rain.

Falls on the eastern Darling Downs, including Dalby, and much of Central Queensland generally registered 5-15mm, which will assist winter crops planted, but will be insufficient on its own to encourage the planting of any summer crops.

In NSW, highest registrations included 17mm at Coonabarabran, 24mm at Gunnedah, 57mm at Inverell, 15mm at Nyngan, 48mm at Warialda and 32mm at Wellington.

Little to no rain fell in key cropping areas in the southern half of NSW.

MCA Goondiwindi agronomist, Stuart Thorn, said most of his clients have had 20-30mm of rain, with up to 50mm in places.

“It’s been a nice circuit-breaker, and it’s stopped the slide in our yield potential.”

Mr Thorn said more rain and soil warmth would be needed before growers looked at planting summer crops, but the rain will bolster yields to compensate for some losses to recent frost events.

“Chickpeas are flowering now and this rain will be particularly good for them, and will help them compensate for frost losses.”

AMPS Moree-based agronomist, Tony Lockrey, said areas north and west of Moree were reported to have gotten the best of the patchy storm rain, with Moree getting 30mm, Croppa Creek 20mm, and Boomi 50mm.

“I’d say 10 per cent of our winter crop is still in the game, and some growers will now get to put the header through when they otherwise wouldn’t,” Mr Lockrey said.

“Some cereals which were coming into head had copped frost damage, and they might now get in front of kangaroo grazing pressure for a couple of weeks.”

Mr Lockrey estimates around 40pc of the region’s winter crop germinated on light rain in July and has died since, and patches of those crops which have managed to regenerate were likely to be sprayed out for ground cover.

“It’s a great blessing to have had some rain, and it’s created a massive turnaround in mood.”

“What will come up on this rain will be some winter and summer weeds and herbage, and if we don’t get another frost, that will give some spring growth.”

Mr Lockrey said grower who received 50mm or more of rain would likely plant a small area to sorghum, but a further 25-50mm and up to 100mm was needed before growers could plant a summer crop with any confidence.

“If the soil temperature’s 10-12 degrees Celsius now, people could plant corn or sunflowers if they got enough rain, but sorghum wants 15 degrees or more.

Narrabri Pursehouse branch manager, Colin Parkes, said the Narrabri region has had between 5mm and 40mm in most places.

“A few guys have ordered some sorghum on this rain, and they’ll take a chance on a crop now.”

Delta Agribusiness Dubbo-based animal-health consultant, Peter Thornton, said most of the region had less than 20mm, but it was likely to be enough to give producers a short break from hand-feeding stock..

“That will freshen crop ups, and maybe get them to grazing height, and it should give some producers enough feed to finish their lambs and get them away.

“It’s hard for ewes to be producing milk in dry conditions like we’ve had.”

Feed Central’s Tim Ford said pressure from southern buyers of fodder could be expected to halt as soon as pasture starts to grow in central and southern NSW, giving fodder markets a welcome circuit-breaker.

“ Country south of Dubbo is set up for spring pasture growth.  Four weeks ago paddocks were bare, but now we are starting to see green pick,” Mr Ford said.

“Warmer, longer days are on the way and feed is ready to grow.

“ It doesn’t take much more than a shower of rain to generate growth.”