DAIRY farmers and opportunity feedlotters are likely to absorb what could well be a considerable tonnage of stained wheat and barley created by recent rains which soaked crops on the point of harvest in Victoria, southern NSW and parts of South Australia. 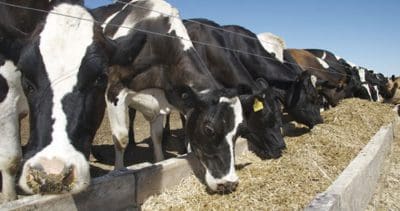 Stockfeed Manufacturers’ Council of Australia executive officer, John Spragg, said anyone feeding poultry or pigs would be wary of feeding stained grain which carried the threat of mycotoxins.

“Those monogastrics are more sensitive to mycotoxins than ruminants like cattle; if affected grain is fed in small quantities like maybe 5 per cent of the ration, cattle can cope with it,” Mr Spragg said.

“If you dilute that weather-damaged grain with other grains, dairy and smaller beef feedlots will absorb it if they’ve grown it themselves, or they can get it for maybe $50 per tonne cheaper than standard grades.”

“The price will drop to a point that the market starts to take it, but if it’s mouldy, it’s not easy to sell and it might take two or three years to get it out of the system.”

Mr Spragg could not see corporate feedmillers or lot-feeding operations being prepared to take weather-damaged grain which presented a health risk to cattle.

“They think about the cost to their own operation of getting it wrong, or liability if they get it wrong and are held to account by customers; companies are more risk averse than they’ve ever been.”

He said numerous types of mycotoxins associated with mould can affect reproduction in sows, and the poultry industry was unlikely to touch any wheat grades below ASW.

“You can use mycotoxin binders and limiters in feed rations, but they come at a cost.”

Mr Spragg said any sprouting in the grain would reduce the amount of available energy it contained, and anyone looking at buying weather-affected wheat or barley was likely to assess its feed value before purchasing.

Dalby Biorefinery grain buyer, Brett Carsburg, said weather-damaged wheat and barley was still looking way too expensive to be an attractive feedstock for the plant.

“White grain would have to be $30 a tonne below sorghum before we’d think about using it, and at the moment it’s well above where sorghum is.”

Mr Carsburg said the cost of trucking weather-damaged wheat and barley up from southern NSW made it even less attractive.

“There’s always a market for weather-damaged grain if the price is low enough.”

ASX contracts for APW, SFW if it can’t find a home here, X buyer would be aware with sprouted and black tip.

Get a few mm today, headers start to see Saturday and get fired up on Monday.

The Riverina and slopes of southern NSW copped some of the heaviest falls of this month to date, with many locations recording 80-130 millimetres to stop harvest just past the halfway mark.

This is likely to have created widespread downgrading in standing crops, and the region’s two major feedgrain buyers, Baiada for their poultry operation at Hanwood, and JBS for its Yanco feedlot, are unlikely to be interested in out-of-spec white grain.

Trade sources say the market is now offering ASW at $245/t and SFW at $240/t for prompt delivery, and the spread could widen as the quality picture develops in south-eastern Australian cropping areas over the next week or two.

“It’s illiquid for feed barley at the moment based on the lack of grower selling,” one trader said.

Traders could not see an export market developing for mouldy grain because of the trade risk, and an ample supply of grain worldwide.

“If it ends up being shot and sprung and having light testweights, it’s going to be hard to sell unless it’s offered at a big discount to ASW, which is the standard most end-users want at minimum.”