WHEAT from Western Australia is scheduled to arrive at GrainCorp’s Gladstone terminal next month to put a cap on the Central Queensland (CQ) feed market in the wake of a disappointing winter-crop harvest for much of the region. 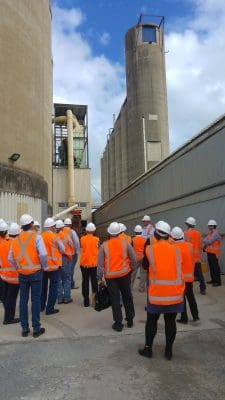 Wheat from WA will be discharged at GrainCorp’s Gladstone terminal next month.

BettaPork general manager, Laurie Brosnan, said the company was buying 3500 tonnes from the vessel which will empty in Gladstone after discharging some tonnage in Brisbane.

“There’s no trouble in CQ sourcing grain: you just have to pay up for it,” he said.

“We’ve figured out the best thing we can do is put it on a boat and bring it around.”

BettaPork runs a 2000-sow piggery at Biloela, 120 kilometres from the Port of Gladstone.

Mr Brosnan said the company would fill its storages with shipped grain trucked up from port, and hold the rest at the Gladstone terminal until space was available to store it on farm.

Trade sources said the balance had been booked by the feedlot sector in CQ, which had found it inequitable to pay up to $65/t in road freight to source grain being shipped into Brisbane.

This wheat and barley is being bought free-on-truck in Brisbane, and has been making its way into feed rations on the Darling Downs with a road-freight component of around $23-25/t, and out to Condamine feedlots for more like $40/t.

“The price for that WA grain would be pretty much the same for whatever port you to took it to, and it’s really that smaller road-freight cost of around maybe $20/t that will make it work out of Gladstone,” one trader said.

The vessel booked to discharge in Brisbane and Gladstone next month is believed to be carrying around 30,000t of grain in total.