A BY-PRODUCT of southern Australia’s rice industry has found a ready market this year. Rice straw has emerged as a feed source for desperate livestock producers chasing roughage, but it seems the limited supplies of what is considered a poor-quality feed option have already run out. 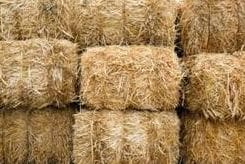 Rice straw has provided a source of roughage in past droughts but a change in farming practices has meant it is now rarely made.

Southern rice farmers used to bale rice straw as a means of potentially making extra income and to clear stubble from their paddocks after harvest.

But the push to double crop – and plant a wheat crop straight after the rice crop to utilise farm moisture – means many rice farmers now don’t want the time delay between baling straw and planting their cereals.

Swan Hill-based hay contractor Coby Pearce has been one of those involved in rice straw production this year.

He said normally he did not bale rice straw at all but was prompted into action after his supplies of barley straw ran out.

“It all started out when we sold out of barley straw and we couldn’t find any more to bale,” Mr Pearce said.

“I suggested to someone that they might like to try rice straw and the response was, “get me 400 tonnes”.”

He quality tested the straw he was making, and said he was surprised that it had higher quality than he had expected.

“If we could bale the straw soon after the rice crop had been harvested, the protein levels were up to 6.7 per cent but the later it got, the more the protein slipped, back to 4.8 per cent,” Mr Pearce said.

“All it is, is a cheap filler for cattle and producers know that.”

Mr Pearce said he did not start baling rice straw until late in the season, but even so still baled 3000 large square bales (8x4x3). The bales weighed about 600 kilograms and yielded about seven to 10 bales a hectare, or four to six tonnes a hectare.

Most of the straw was baled around the Moulamein, NSW, area and was done by Mr Pearce on a share basis with the farmers.

“When we got to the last of the rice straw, we had a bidding war with people trying to outbid each other.”

So keen were buyers that Mr Pearce said he tried to do some late baling recently and while that quality was less with poor colour, it had sold earlier this week.

“In a drought, I think people will feed anything.

“Locals said I was mad to make this straw and it is very hard on gear as it is like wire rope to handle.

“We’ve worn out a baler with it but the straw has sold.”

Coleambally, NSW, farmer Trent Gardiner bales rice straw each year in small square bales for the construction industry but said he could have sold what he did make “10 times over”.

“Not many people make it now as farmers are wanting to get that next wheat crop in to paddocks used to grow rice so they can make use of the water,” Mr Gardiner said.

There was also the risk of making rice straw and getting weather damage, as the curing process took eight to 10 days.

And despite burgeoning demand, there was no real opportunity for more rice straw to be baled.

“To be able to feed it to cattle, you have to bale it pretty much straight after harvest,” Mr Gardiner said.

“The cows do love it, and I know if I’ve made it in the past and delivered it to dairy farmers, the cows will be queueing up to get it.”

Despite the demand and returns for rice straw this year, Mr Gardiner said he could not imagine many growers would attempt to make some next season.

Meanwhile Grain Central understands there has been no interest in buying rice hulls, a poor quality by-product of rice production which has low protein levels of about 4pc.