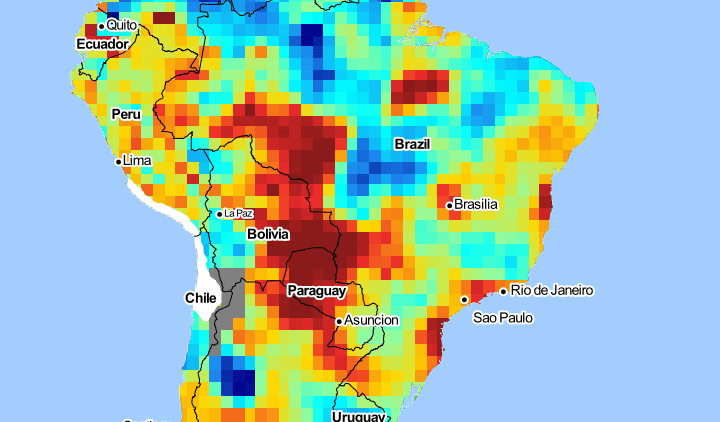 DROUGHT conditions in Brazil escalated dramatically in April as the La Niña influence intensified, leading to the collapse of this year’s monsoon around two weeks earlier than usual. This will seriously impact safrinha corn production, especially in the later-planted regions, as yield potential falls due to lack of moisture.

The onset and retreat of the wet season in central Brazil are traditionally quite distinct. Basically, it rains almost every day in the wet season and rarely rains in the dry season. The autumn transition from wet to dry traditionally happens rather swiftly, typically in the first week of May.

The soil-moisture profile at the time of seeding the safrinha crop earlier this year was exceptional, with a significant proportion planted ahead of schedule. In Mato Grosso, around 93 per cent of the crop was planted before the ideal seeding window closed at the end of February. This led to a flurry of record safrinha corn-production forecasts from local and global analysts.

However, potential production issues began to emerge as early as mid-March, when rainfall intensity declined, and the falls became far more sporadic than normal. That moisture deficit accelerated in April, with precipitation in the first half of the month minimal, and then the tap turned off on April 16.

Mato Grosso is facing its driest April in 17 years, according to a recent report issued by weather service EarthDaily Agro. April rainfall for the state is expected to be just 30 millimetres, 70pc below the average for the last decade. In the neighbouring states of Goiás and Minas Gerais, April rainfall is expected to be just 15pc of the 10-year average. The situation in Mato Grosso is very similar to 2016, when the safrinha corn yields finished that season around 30pc below average after the dry continued through May and June.

The below-average rainfall in late March and April has seriously depleted soil-moisture levels. Ideally, corn enters the pollination stage with close to a full moisture profile. However, only a small proportion of the crop had that luxury this year, and yields on those fields are expected to be above average.

The prognosis for the majority of central Brazil’s safrinha corn area is not as rosy. The crop is approaching its peak moisture-demand phase, with as much as 40pc already suffering a low-to-moderate level of moisture stress. Coupled with that dryness is the growing threat of frost. There have already been overnight frosts in the higher elevations of southern Brazil. If it stays dry and cold, the possibility of frost impact on safrinha production grows.

Vegetation vigour, measured by the Normalised Difference Vegetation Index (NDVI), is starting to show increasing signs of moisture deficit. This trend is expected to continue as the effects of next to no rain in the second half of April materialise. And there are no significant falls in the 10-day forecast. In fact, it looks dry for the next month.

Brazil is the world’s third-largest corn producer after the United States and China. The most recent World Agricultural Supply and Demand Estimates (WASDE) put total 2021-22 production at 116Mt, around 75pc of which will be from the safrinha or second corn crop. In his latest update, crop consultant Dr Michael Cordonnier left his Brazilian corn crop estimate unchanged at 112Mt. In the export stakes, the United States Department of Agriculture has Brazil in second place with 44.5Mt, behind the US with 63.5Mt and just ahead of Argentina on 39Mt.

Brazil’s production hiccup comes at a time of heightened demand for South American corn as the war in Ukraine has landlocked as much as 15Mt corn that was destined for the global export market. The issues in Brazil are globally significant as it is the leading global corn supplier between now and the US harvest in the Northern Hemisphere autumn. Some analysts expect downward production revisions to hit the wires in the next week, with a lower forecast even possible in this month’s WASDE report, due for release May 12.

Surprisingly, markets seem to be more interested in the weather situation and potential new-crop planting delays in the US, the slowest since 2013, rather than the tightening of the 2021-22 balance sheet. Nevertheless, prices have certainly reacted to the mounting issues, with nearby Chicago futures closing last week at a 10-year high of US$8.135 per bushel.

To put that in perspective, the corn price dropped to just over $3/bu during the early months of the COVID-19 pandemic. In the first four months of 2022, the May futures contract has rallied 37pc. There have been 82 trading sessions over that period, with the up days outnumbering the down by a ratio of two to one. In the 31 days from March 29 to April 29, the market was up more than 14.8pc, reflecting the growing global supply concerns.

Amid the Ukrainian old-crop supply disruptions and the Brazilian weather woes, China has turned its corn purchasing attention to the US. Asia’s biggest corn importer purchased almost 1.1Mt of old and new-crop corn in one transaction last week, the fourth flash sale of corn to China exceeding 1Mt April. New-crop sales of US corn are almost 5.5Mt, more than 65pc higher than at the same time in 2021.

Corn is now well into a demand-rationing price regime, but the rally will continue as long as demand is strong, and supply remains uncertain. The global consumer is reeling, caught with inadequate purchases in a rallying market. Global inventories are in a vulnerable state, and the security of cover comes at a high price.