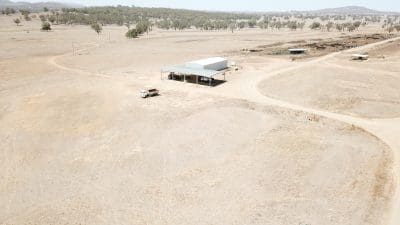 UNE’s Tullimba feedlot is operating below capacity due to drought: Photo: UNE

HIGH-LEVEL water restrictions introduced this week in Tamworth, and coming next week to Armidale, are the biggest sign yet that inland New South Wales is in real trouble when it comes to water supplies.

With a combined population of close to 90,000, Tamworth and Armidale are the biggest centres in the New England region, where a tightening supply of stock, domestic and industrial water is impacting households and businesses.

Graziers in this important beef, wool and sheepmeat area have been reducing their herd numbers since 2017, when drought took hold, and some feedlots are ratcheting back from capacity because of water concerns.

In recent weeks, destocking of grazing properties has accelerated as creeks and dams run low or dry, and flows from some bores drop.

Davidson Cameron Guyra joint manager Craig Waters said many of the agency’s clients had reduced their stock numbers by at least half, and some had destocked completely.

“In the past few weeks, I don’t know how many people around here have gotten rid of the last of their cattle because they’ve run out of water, but it’s a lot,” Mr Waters said.

“It doesn’t matter where you go, it’s the same story.”

Mr Waters said the agency had managed to find agistment at points as far flung as Enngonia in north-west NSW, Lake Cargelligo in southern NSW and Charleville in Queensland.

“The ones out west might have three or four more weeks where they are, and then we’ll have to find somewhere else for them.

“We’d hoped to have had rain to bring these breeders home by now, but that’s not the case.”

Mr Waters said stock on agistment were in good condition, but graziers were finding it hard to achieve to average marking percentages on their 2019 drops at their home properties.

“We’ve got a good fat lamb business in this region, and some people that normally mark 130 per cent of lambs are talking more like 50pc.”

Graziers in central and northern NSW, including the New England, as well as those in southern Queensland are relying on grain, hay, cottonseed, silage, pellets and by-products like almond hulls and dried distillers’ grain (DDG) to feed sheep and cattle.

“A lot of people throw out a bit of hay in winter, but this year, it’s been full-on feeding for months.”

Drillers have been run off their feet putting down bores for graziers, and for domestic use also, in the entire drought-affected area.

“Next month’s going to be critical.

“We’ve had frosts this week, and the hot weather’s coming.

“Thank god the feedlots are there, and they’ve been taking cattle at lighter weights because they can’t get heavier ones.”

Southern restockers, as well as processors, have been competing for northern NSW sheep and cattle.

Mr Waters said the extent of the drought meant it would take “years” for herds to rebuild in the region, which is a major supplier of Angus cattle particularly to the feedlot sector.

Small feedlots in northern NSW admit their numbers are down, and industry sources have said larger ones including the 10,000-head Hancock Prospecting Group’s Gunnee feedlot at Delungra are running below capacity now it is carting water to supplement supplies.

At the University of New England’s Tullimba Feedlot 40 kilometres west of Armidale, numbers are down 20 per cent from capacity.

“We currently have 800 head on feed at Tullimba, which is 200 below capacity,” UNE SMART Farms industry engagement manager Rachelle Hergenhan said.

The feedlot has a research focus, but custom feeds for clients, a practice Dr Hergenhan said may not be able to continue in the current environment.

“We are monitoring our water very closely and, as such, are prioritising research-project cattle as opposed to taking on extra commercial cattle to feed.

“Currently our only water source is a large dam which still has adequate water in it.”

Dr Hergenhan said Tullimba was investigating options to ensure continued supply from the dam, and had also put in a test bore to provide an alternative water source.

“The process to get a bore was instigated about 18 months ago, long before we expected it would actually be needed as an alternate water source, but it is certainly now an alternative we’d like to start making use of.

“We are just waiting on the required approvals to equip and use the bore.”

At the Alco Feedlot east of Moree, Coralee and Allan Gillogly and family are running their operation with 1500 head in the yards, well below the licensed 4000-head capacity, and have increased their bore capacity ahead of the worsening drought.

“We’ve got bores down, and we’ve got pumps going, and we’re feeding and watering everything.”

“Our breeders are on a ration, and our sons are going to the coast and bringing back truckloads of silage, and we’ve been feeding hay and cottonseed as well.”

The Gillogly family has sent some of its breeders to Corryong on the Victorian border, and others to South Australia, to keep their herd genetics going until the drought breaks.

WaterNSW has advised affected landholders that Peel River flows downstream of the Dungowan temporary weir, upstream from Tamworth, will stop on 30 November if drought conditions persist.

The move is expected to affect agricultural producers and processors downstream from Tamworth.

While processors and intensive livestock operations have not yet announced impending production cuts, industry sources said they could be expected if drought drags on into next year.