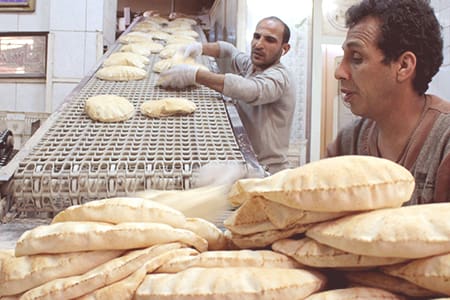 Egypt is the world’s biggest importer of wheat, with flour primarily used to make flat bread. Source: Food and Agriculture Organisation of the UN

EGYPT returned to the global wheat market last week, sealing deals on Wednesday to purchase 350,000 tonnes, the majority of which will come from Europe, following a tender announced two days earlier by the General Authority for Supply Commodities (GASC).

Potential suppliers could submit free-on-board (FOB) offers for a May 20-31 shipment period and/or cost and freight (C&F) offers for arrival at Egyptian ports in the June 1-15 window, with payment at sight. The tender had originally specified European-origin wheat only, sending the MATIF wheat futures into an upward spiral. GASC later said offers from Russia and Ukraine would be considered, in conjunction with those from Bulgaria, France, Germany, Hungary, Kazakhstan, Latvia, Poland, Romania and Serbia.

This is Egypt’s first successful international wheat tender since February. It cancelled two tenders as wheat prices soared and offers evaporated following Russia’s invasion of Ukraine, temporarily restricting the prospect of wheat being shipped out of Black Sea ports by two of the world’s largest exporters. Egypt relies heavily on wheat from Black Sea ports. Total wheat imports over the past five years amounted to 62.6 million tonnes(Mt), with 59.7 per cent from Russia and 22.3pc from Ukraine, for a combined total of 82pc of purchases over the period.

The successful Russian offer was submitted by Aston, one of Russia’s largest agricultural and food-ingredients businesses, with activities in farming, oilseeds crushing, edible oils and grain origination and export. The company reportedly has its own vessels, allowing it to mitigate many of the costs most exporters would currently face when shipping out of the Black Sea. The average price across the entire 350,000t tender was $486.35/t C&F, close to $150/t higher than GASC’s previous tender on February 18.

Earlier this month, the Egyptian Government announced its wheat reserves had dropped significantly since the war in Ukraine began in February. Egypt only has enough wheat to meet around 2.6 months of domestic demand, well below historical levels, and less than half of the government target of six months. The world’s largest importer typically has as much as one month’s import volume, or 1Mt, in transit at any one point in time. But with no tenders for more than two months, there are currently very few wheat -laden boats on the water.

However, stocks are expected to receive a boost from the local harvest, which commences this month. Production is forecast to increase by 8.9pc from 9Mt in 2021 to 9.8Mt this year. The higher production is attributable to a higher harvested area, estimated to be 1.53 million hectares (Mha) compared to 1.4Mha last year. Egyptian authorities are hoping to increase the harvested area by around 30pc, or 420,000ha, over the next three years.

The higher area came after the government announced its wheat-purchasing prices ahead of the planting season last year, allowing growers to make more informed crop-rotation decisions. And then, on March 15, in response to the war in Ukraine, the government approved an additional incentive of 65 Egyptian pounds (EGP) per ardeb, or $27.50/t, on the prices it had previously agreed to pay farmers to purchase their locally produced wheat.

After this increase, the government payments to farmers will range from EGP865/ardeb to EGP885/ardeb or about $366-$375/t based on quality and moisture. The new price is 22pc higher than last season’s procurement price, and payment shall be cash on receipt of the wheat, or within a maximum of 48 hours.

Egypt’s Ministry of Supply and Internal Trade (MoSIT) also issued a ministerial decree requiring every wheat producer to sell a minimum of 12 ardebs per feddan, or 4.28t/ha, to governmental wheat purveyors this harvest season. The decision prohibits farmers from selling the remainder of their wheat production to non-governmental agencies unless a permit is first obtained from the MoSIT.

The decree also stipulated that large farms (greater than 10 hectares) should sell 90pc of their wheat production to governmental wheat merchants and, in return, will receive subsidised fertilisers for their summer-cropping program.

The government aims to procure 6Mt of wheat from local growers this harvest, a historically high 61.2pc of estimated national production. This goal is 66.7pc higher than last year’s purchases of 3.6Mt and 71.4pc higher than the 2020 purchases of 3.5Mt. This season’s procurement program will commence on April 1 instead of April 15, and will continue through to the end of August instead of mid-July.

Egypt’s latest tender purchase came just two days before it announced an agreement to source wheat supplies from India, adding the world’s second-biggest producer, and occasional exporter, to the list of 17 other international import origins accepted by GASC. Logistical limitations and quality issues have long stymied India’s efforts to sell significant volumes of wheat into the world market. However, a run of bumper crops and the exceptional demand resulting from the Ukraine crisis has provided an added incentive for India to solve the myriad of export constraints.

In an announcement last Friday, India’s Commerce Minister said that Egypt is likely to buy around 1Mt of wheat from India, 240,000t of which is expected to be shipped in April. The acceptance of India reportedly came after a rigorous process of field visits and checks of Indian quarantine facilities by Egyptian authorities due to concerns that Indian wheat imports may contain karnal bunt disease, a threat to domestic output.

India is just one of many wheat-import origins being considered by Egypt as it attempts to decrease its reliance on Black Sea exporters, Russia in particular, in the wake of major supply disruption stemming from the conflict in Ukraine. The USDA shaved 500,000t off its Egyptian wheat-import forecast due to rising prices and disruptions to Black Sea supply. However, the north African nation still has some way to go to meet the 12Mt wheat import target for the 2021-22 marketing year, which would enable it to meet domestic demand and slightly rebuild stocks.