AN INCREASED maximum axle load of 25 tonnes on the rail line between Griffith and Junee in southern New South Wales will accommodate heavier trains and reduce freight costs, according to the NSW Government. 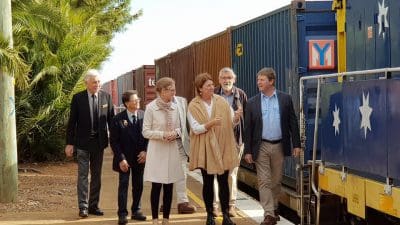 Regional MPs gather at Leeton in southern NSW to announce an upgrade of the Junee-Griffith train line.

The upgrade of the 174 kilometres of track will cost the NSW Government $60.4 million as part of its Fixing Country Rail Program.

NSW Minister for Roads, Maritime and Freight, Melinda Pavey, said the upgrade would allow more goods to be transported by rail, and reduce costs for producers and consumers.

“The increased axle loads will mean line speeds will increase from 50 kilometres per hour to 80km/h,” Mrs Pavey said.

“This will cut delivery times, allow more goods to be transported by rail and reduce costs for producers and consumers.”

“This work will remove trucks from our roads, shifting more than 200,000 tonnes of freight on to the rail network,” Mr Evans said.

Member for Cootamundra, Steph Cooke, said the project would enable rail freight operators to use heavier locomotives to operate without a fuel-carrying limitation.

“Producers and businesses in the Riverina will benefit from a more efficient and lower-cost logistics chain, improving their domestic and international competitiveness, as well as create benefits to our consumers at the till of their local supermarkets,” Mrs Cooke said.

The Riverina produces cotton, grain, hay and horticultural produce for the domestic and export market, and the Griffith-Junee line gives containerised and bulk freight access to ports in NSW and Victoria.