AGROMIN Australia is expanding its sales of pulses to South Asia, with its 50-per-cent ownership of Victorian packing house, Peaco, the key to its quality and volume capacity which is cornering an expanding share of the market for Australian farmers. 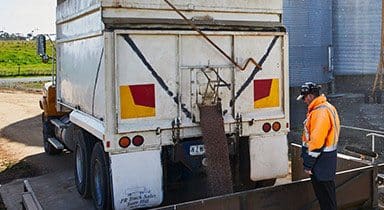 Unloading a truckload of pulses at Peaco’s facility at Donald in Victoria.

Agromin owner, Rajni Patel, bought into Peaco five years ago, with its connection to around 150 Australian farmers being a main attraction.

“I bought into Peaco because of my relationship with Shane Wall, the general manager. We’ve known each other for 20 years so, when he wanted to expand operations, I thought, ‘let’s make this a win-win situation’,” Mr Patel said.

“Peaco sells to whoever pays the highest price,” he adds.

“Agromin doesn’t get any favours. It’s a very transparent relationship.”

As a stakeholder in Peaco, Agromin can buy from Peaco, which will then pack and prepare the orders for export at the facility.

In Malaysia, Patel’s family exported palm oil and fresh produce to Bangladesh, India and Pakistan, and when Mr Patel moved to Australia, he became involved in pulse markets.

“Dun and field peas and three types of lentils followed.”

New to Australia, Patel decided not to deal directly with farmers but to work with established packing houses around the country.

“It made sense. They already had strong relationships with farmers so I just needed to negotiate a contract with them.”

“My policy is to only buy good quality; it’s the basis for my good name all over the world.”

He said because prices can change from one day to the next, it was important for the importer to know the agreed contract price would be honoured, regardless of market movement.

Peaco briefs its farmers about what South Asian market will be wanting in around six months’ time, and Mr Patel said that depended on what crops were failing in India, Bangladesh and Pakistan.

“If there’s no rain or there’s extreme flooding, especially in June, July and August, the market and price will definitely move.”

“In 2016, India and Pakistan’s crops failed, so the prices were high. It set a record for us of about two million tonnes.”

While food fads have not applied to such traditional markets, Mr Patel said he understood the region’s shifting festival timetables, and which foods were eaten at certain times of the year.

Examples include the Diwali festival in October and Ramadan in late May to June.

“We make sure we meet delivery a few weeks before, so importers can rely on us and say, ‘buy from Agromin and you always get the product in time’.”

Patel said price alone used to matter in his markets, and “clean and green” did not concern importers or consumers until recently.

This has meant additional cleaning of pulses at Peaco.

“At Peaco, we store all the products in separate silos. That’s around 40,000 tonnes of storage over 25 to 30 silos to accommodate and separate dun peas, fava beans, three varieties of lentils, two types of chickpea and many others.”

Agromin packs, tests and ships pulses free on board (fob) so they and the packing house arrange for the containers and nominate the vessel.

“We order our containers steam-cleaned so there are no wheat traces, and our pulses are externally tested for moisture, protein and purity for quarantine purposes.”

Although the pulses are packed on demand and at the packer’s facilities, Mr Patel has not been tempted to invest in the transport side of the business, or in new markets.

“We can’t compete in the Middle East because of Russia, the Ukraine and South American countries. And most of Australia’s sorghum goes into China, where I don’t understand the price or have good buyers,” he explains.