SAUDI Arabia has this week bought 1.5 million tonnes (Mt) of barley, or 50 per cent more than it said it wanted last week, the world market’s clearest signal yet that new-crop northern-hemisphere barley has failed to ease tightness on the global balance sheet. 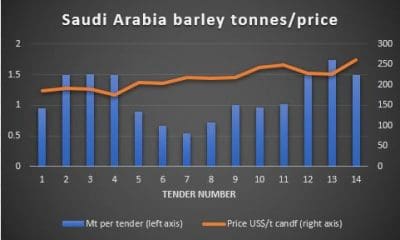 At a cost of US$261/t cost and freight for November-December delivery, the price is up $30/t from its previous tender for September-October delivery of $226/t.

Bullish global sentiment in barley is increasingly heaping attention on Western Australia and parts of southeastern Australia, which will produce enough malting and feed barley to satisfy Australia’s domestic requirements.

What the world market seems to be scrambling for is Australia’s export surplus, because in the current global export calendar, there is little to compete with it.

Ten Tigers director, Chris Tonkin, said this was sending positive signs to growers of malting barley, indicated by its premium over feed barley climbing from A$30/t to $40-$42/t.

The trade believes shipments from WA ports, and also South Australia, will play a crucial role in getting northern-hemisphere markets through to 2019 new-crop.

In northern Europe, where some of the world’s best malting barley is produced, a hot and dry spring and summer has meant low yields and high protein, and maltsters in the region are looking as far afield as Australia for grain to feed their maltings.

And then there’s China.

It has bought more than 3Mt of Australia’s 2017-planted barley crop, mostly for brewing, and Australian Bureau of Statistics’ export data has shown its purchasing has been affected by high prices and limited supply.

China buys fair average quality (FAQ) barley as well as malting varieties to supply its malthouses, but the drought in eastern Australia has meant that feed values have taken it to levels above world parity.

Often when feed barley prices are very high, malting barley premiums are trimmed, but they have not eased this year in Australia, which has indicated that malting buyers recognise the premium must be paid to secure barley against intense competition from livestock feeders.

In its periodic Australian crop report released on Tuesday, ABARES forecast Australia’s national barley production from the crop now in the ground at 8.33Mt from 3.96M hectares, which compares with the 2017-18 crop of 8.93Mt from 3.88Mha.

Mild spring weather is critically important for the development of barley crops which can meet rigorous malt specification.

While seasonal conditions are good to excellent in much of Western Australia and parts of South Australia, crops in Victoria and southern New South Wales are on a knife-edge in terms of yield potential as days get longer and temperatures climb.

Australia normally exports around 6Mt of feed and malting barley in total annually, but this is likely to be reduced considerably this year due to eastern Australian demand for Western and South Australian barley to supply its maltsters and feed market.