Last week, AEGIC hosted a virtual event ­for the Vietnamese brewing and malting industry to provide an update on the 2020 growing season and communicate the benefits of Australian malting barley. 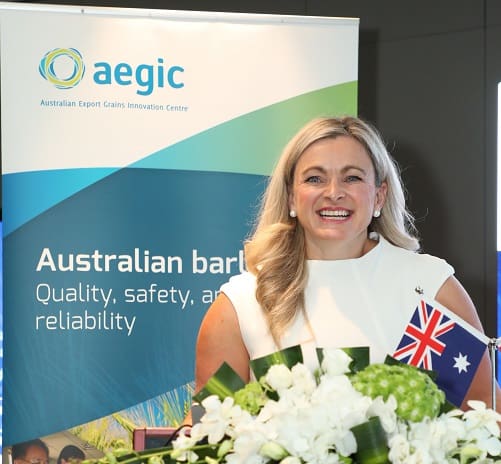 “Vietnam is in the top 10 beer markets globally and Australia is their largest supplier of malt and malting barley,” she said.

“Vietnam consumed more than 4.6 billion litres of beer in 2019. COVID has had an impact on beer consumption, however Vietnam is the third largest consumer of beer in Asia and the largest in South East Asia.”

Ms Raynes said beer production would increase by 2-3 per cent per annum towards 2030, boosting demand for malt and malting barley.

“AEGIC analysis forecasts that Vietnam’s malting capacity will increase towards 2030, which will result in malting barley imports jumping to about 330,000 tonnes, nearly double that required in 2019,” she said.

The webinar – “Australian Malting Barley: Optimising Value” – had a large response, attended by over 40 representatives of the Vietnamese malting and brewing industries.

Participants received a detailed update on the 2020 barley season and an overview of the Australian barley industry from Ms Raynes.

University of Adelaide Associate Professor Matthew Tucker presented his research into new opportunities for the customisation of barley grain and beta-glucan.

Ms Raynes said AEGIC would continue to collaborate with the Australian barley industry to support the important Vietnamese market.

AEGIC is an initiative of the Western Australian State Government and Australia’s Grains Research & Development Corporation.